A Win Against the #MeToo Mob 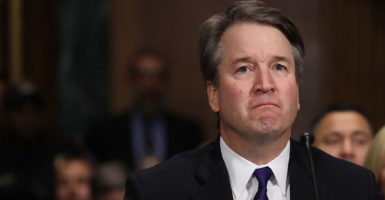 That’s what the Women’s March called Sen. Susan Collins, R-Maine, after she announced she was a “yes” vote to confirm D.C. Circuit Judge Brett Kavanaugh to the Supreme Court.

This is who @SenatorCollins is: pic.twitter.com/U9klDNzeWr

And it showed that for some on the left, this was never about fairness or due process or anything but exploiting the very real—and concerning—emotional trauma of millions of women to advance a political goal.

You can believe we have a crisis of sexual assault in this country, that there is a valid thirst for justice, and also that, based on the facts we have, Kavanaugh is not credibly guilty of sexual assault.

Collins was not dismissive of Dr. Christine Blasey Ford’s allegations against Kavanaugh. In her speech Friday announcing why she was backing Kavanaugh, she detailed her thinking.

Collins noted that while Ford’s testimony was “sincere, painful, and compelling,” none of those Ford mentioned as present at the party where the alleged assault occurred when they were teens was able to corroborate her story. “Under penalty of felony,” they have not backed Ford’s story.

Collins noted that while Ford knows she had to have gotten a ride home from someone, no one has come forward to say he or she gave her that ride.

“The facts presented do not mean that Professor Ford was not sexually assaulted that night—or at some other time—but they do lead me to conclude that the allegations fail to meet the ‘more likely than not’ standard,” said Collins.

And for that—for daring to weigh the facts and come to her own conclusion—the Maine Republican is now being derided by other women as a “rape apologist.”

Because presumably she committed the sin of not acting in accordance with the mantra #believeallwomen—a ludicrous standard that also seems to be conveniently discarded by the left whenever, say, Bill Clinton’s accusers come up.

And it does a great disservice to sexual assault survivors. There is much advocates of the #MeToo movement could do to help victims, from encouraging quick reporting of the assaults (particularly crucial if physical evidence exists) to working with police departments and hospitals to be sensitive and helpful to traumatized survivors. (No, of course, it’s not fair that a survivor should have to deal with the additional trauma of reporting. But without videos of the incident, it’s likely the best way to advance a case beyond he said, she said.)

The movement also could encourage a culture with far less drinking, given how often excess drinking and assault seem to overlap. (And no, I’m not saying a woman is to blame if she is assaulted after she has been drinking, any more than she is to blame if she is assaulted when walking on a lonely street at night. I’m just discussing possible ways to make assault less common.)

But the push to #believeallwomen—regardless of evidence and credibility—only undermines the movement.

And that’s not the only way liberal activists have let down women in this round.

Amid Ford’s testimony Sept. 27, one moment especially stood out: When she expressed ignorance of an offer made by Senate Judiciary Chairman Chuck Grassley, R-Iowa, that she could answer questions in privacy in California, where she lives:

Republican counsel Rachel Mitchell: “Was it communicated to you by your counsel or someone else that the committee had asked to interview you and that they offered to come out to California to do so?”

Ford: “I just appreciate that you did offer that. I wasn’t clear on what the offer was. If you were going to come out to see me, I would have happily hosted you and had you—had been happy to speak with you out there. I just did not—it wasn’t clear to me that that was the case.”

And that wasn’t the only way Ford was let down. As Collins said in her remarks Friday:

Professor Ford testified that a very limited number of people had access to her [confidential] letter. Yet that letter found its way into the public domain. She testified that she never gave permission for that very private letter to be released. And yet, here we are. We are in the middle of a fight that she never sought, arguing about claims that she wanted to raise confidentially.

But of course, private questioning wouldn’t have led to the visuals of Ford testifying, visuals splashed across social media by activists. Her letter remaining private would not have led to a nationwide media circus over an alleged incident 36 years ago.

It’s hard not to be cynical about what happened to Ford—and why.

There were already pushes for moblike tendencies before this vile graphic from the Women’s March.

Guess who’s perpetuating all of these kinds of actions? It’s the men in this country.

And I just want to say to the men in this country: Just shut up and step up. Do the right thing for a change.

Hirono’s remarks did a grave disservice to the many, many men who have treated women with nothing but respect, and who perhaps have intervened to try to keep women safe from other men.

And they did nothing to advance justice for sexual assault survivors—or Ford.

The way forward for sexual assault survivors is to press for justice, one individual case at a time. It’s not to shut up all men, or automatically believe all women.

And it’s certainly not to deride as a “rape apologist” someone who took sexual assault allegations seriously, examined the evidence, demanded further investigation, and then shared her conclusions.