I Was a Crime Reporter in Maryland in the Early ’80s. I Never Heard of Teen Gang-Rape Parties 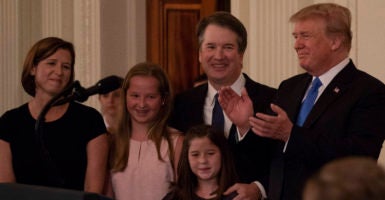 Happier days: President Donald Trump leads applause for Brett Kavanaugh and his family July 9 after announcing his nomination as a Supreme Court justice in the East Room of the White House. (Photo: Alex Edelman/CNP/Newscom)

“Oh, I think everyone in the county remembers these parties,” Julie Swetnick says with a smile during her nationally televised interview.

I had my first job as a reporter in Montgomery County, Maryland, at the time Swetnick claims Brett Kavanaugh and other teenage boys routinely were drugging and gang-raping girls at a series of house parties in the county, which adjoins Washington, D.C.

I got a full-time job as a reporter at the widely distributed Gazette after graduating from George Washington University in 1979 and doing an internship there the previous summer. I covered Gaithersburg and Rockville city governments, including the city councils and agencies such as the police departments. (Rockville is the Montgomery County seat.)

I never heard word one about teen parties where girls routinely were sexually assaulted, much less where gang rapes were on the agenda, as Swetnick claims of gatherings attended by  Kavanaugh, now President Donald Trump’s Supreme Court nominee.

In late 1981, I became a reporter for the Rockville-based Montgomery Journal, where my first beat was covering county police and crime. I was a committed liberal in those days, but that’s another story. I don’t recall coming across a single report of a gang rape at a crowded party.

However, Swetnick says in her interview with NBC’s Kate Snow that she told her mother and “contacted” the Montgomery County Police Department about a party in 1982 where she says Kavanaugh was present and where she was raped at age 19.

Swetnick’s mother and the one police officer she names are both dead, Snow notes.

It could take up to a month for police to find and produce any incident report on such a crime, the department told NBC.

The department’s public information office routinely provided reporters such as myself with written summaries of crimes occurring within the previous few days throughout the county, based on such incident reports. I used to rewrite the summaries in news style for publication.

These summaries included the time, date, street, and block where any offense occurred. Police also issued stand-alone press releases about particularly newsworthy crimes, arrests, or trends. As a reporter, you also could ask to see the original report.

What a story a string of alleged, unsolved gang rapes would have made. This would have been huge for me or any other police reporter.

Swetnick’s story is so over-the-top unlikely on its face, though, that I can’t imagine either the Gaithersburg Gazette or the Montgomery Journal, much less The Washington Post, running an unverified story about such parties without an official police report to back it up.

If “everyone in the county” knew, we’d have had sensational arrests, highly publicized charges, and memorable public uproars at police headquarters, the school board, and other government offices in Montgomery County about teen rape parties.

And I have no doubt I would have been put on probation, if not fired, for seeking to publish such an implausible and unconfirmed story in either the Gazette or the Journal. (Or maybe if I had missed a big, but documented, story like it.)

During my years as editor of the Montgomery Sentinel and, later, an editor at The Washington Times, I would have had major issues with any reporter who pushed an unsubstantiated story like this. I’m proud to say that today, The Daily Signal’s editors take the same view.

After all, there was such a thing as common decency, not to mention journalism standards and libel laws.

Yet a senior national correspondent and weekend anchor for a major network, Kate Snow of NBC News, was able to get on air with an interview in which Swetnick gives a watered-down version of her original allegation against the Supreme Court nominee.

By her own account, Swetnick was an adult in the room at party after party, having graduated from Gaithersburg High and become a student at nearby Montgomery College.

In my admittedly limited experience, college women weren’t into partying with high school boys. But when pressed, Swetnick says that although kids as young as 15 were there, so were adults as old as 25, “maybe even more.”

She tells Snow that she didn’t know what was happening to girls behind closed doors where boys were gathered until it happened to her in 1982, or she would have tried to save them—and also would have reported it.

To her credit, Snow alerts viewers that NBC News couldn’t verify Swetnick’s story with any of four persons whose names she supplied to back up her account. One didn’t know her, another is dead, two others didn’t return calls.

“NBC, for the record, has not been able to independently verify her claims,” Snow says at the opening of an 18-minute report (an enormous amount of TV time) that aired Monday on MSNBC. “There are things that she told us on camera that differ from her written statement last week.”

Swetnick, now 55, can’t get straight in the interview when she first thought about coming forward—when Kavanaugh, now 53, was on the short list for the Supreme Court vacancy; when he appeared close to being confirmed by the Senate; when Christine Blasey Ford, 51, came forward, or whatever.

Can you say warning bells?

But Snow and NBC ran with her salacious story anyway, with a shorter version appearing on the network’s “Nightly News.”

Swetnick talks about meeting Kavanaugh, who she says was wearing his “Georgetown Prep uniform” or parts of it.

The all-boys Jesuit school had a dress code, as it does now, but not a uniform.

She says she saw Kavanaugh grope girls after pretending to drunkenly stumble into them.

She describes becoming disoriented, then being shoved into a room and raped by many assailants at the last of the parties she attended. She tells Snow she can’t say with certainty that Kavanaugh was one of her attackers.

“But before this happened to me at that party,” Swetnick says, “I saw Brett Kavanaugh there, I saw [Kavanaugh friend] Mark Judge there, and they were hanging about the area where I started to feel disoriented.”

Swetnick doesn’t go as far in the interview with Snow as she did in her statement to the Senate Judiciary Committee, saying only that she saw Kavanaugh standing near “punch” at one or more parties and “giving red Solo cups to quite a few girls,” but she didn’t see him “spiking” the green liquid.

“I would not take one of those glasses from Mark Kavanaugh—I mean Brett Kavanaugh, excuse me,” she says at one point.

Several days after Ford testified before the nation about how she most remembers Kavanaugh’s and Judge’s laughter, Swetnick tells Snow on a nationwide report that she could “hear them laughing, laughing.”

Kavanaugh and Judge say they were present at no such incidents.

It’s just the latest example of the situational abandonment of journalism standards that older scribes like me complain about, especially and most egregiously when it comes to covering conservatives or Republicans.

How long ago was it that most of us couldn’t imagine a respectable newspaper, network news division, or cable news operation rushing out an interview with an unreliable source making incendiary charges about a public figure?

Even now, could we see established media outlets going with allegations that Merrick Garland or Arne Duncan was a leader of a teenage gang-rape ring?

Rookie reporters are taught to be skeptical of their sources and double-check claims and motives.

“If your mother says she loves you, check it out,” is the old-school editor’s admonition to green and seasoned reporter alike.

If NBC News halfway checked it out, as Snow recounts, it went ahead anyway after coming up empty.

It’s one thing to interview Swetnick in private, to understand her story. It’s quite another to give her a national stage to say such things.

Not so long ago, heads would have rolled in the newsroom. Those quaint days apparently are gone, though, at least when it comes to covering some people.