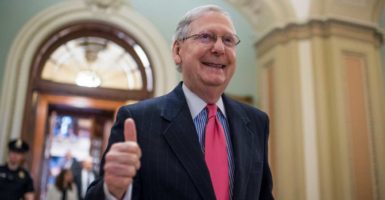 On Monday morning, the U.S. Supreme Court declined to review the case of Michel v. McConnell, where the courts below rejected a citizen’s effort to sue senators for inaction on D.C. Circuit Chief Judge Merrick Garland’s nomination to the Supreme Court.

The lower courts’ opinions explain why another controversial dispute, Citizens for Responsibility and Ethics in Washington (CREW) v. Donald J. Trump, will also fail—with only days left until the government’s response is due in that case.

Disappointed with the process of the Senate’s refusal to hold a vote on Garland’s nomination to the Supreme Court, Steven S. Michel sued Sens. Mitch McConnell, R-Ky., and Chuck Grassley, R-Iowa, for allegedly violating his constitutional right “to elect his senators by depriving his home-state senators of a voice” in the nomination process.

The U.S. Court of Appeals found, as did the district court below, that Michel “lacked standing to bring this action because he failed to demonstrate an injury in fact.” It found his “alleged injury—the diminution of the effectiveness of his votes for Senators—is ‘wholly abstract and widely dispersed.’”

As the district court wrote, Michel suffered only “the type of undifferentiated harm common to all citizens that is appropriate for redress in the political sphere,” not the courts. The Supreme Court appropriately denied Michel’s petition for review.

Lawyers with CREW face similar problems in their lawsuit, filed in January in the Southern District of New York, against President Donald Trump, because they also raise claims that do not touch their lives in any materially different way from any other citizen—except, perhaps, at the ballot box.

CREW argues that Trump violates the U.S. Constitution’s little-known Foreign Emoluments Clause whenever any of his businesses engage in any commercial transaction with any foreign state agent.

For several reasons related to its text and history, it is improbable that the clause—which was designed to keep ambassadors off of foreign states’ doles—is that broad. Nor is it so selective: Past presidents from George Washington to Barack Obama would likely have violated CREW’s far-reaching interpretation of that clause (explained here).

As Michel v. McConnell clarifies once again, standing requires a plaintiff to show a specific and concrete injury—not a mere distaste for or disagreement with a politician. CREW claims, however, that Trump has injured the group because the costs it absorbed in suing him “diverted” resources it could have used to sue other politicians for ethics violations.

The injury CREW alleges is roughly equivalent to the “injury” that its complaint has imposed on the court and the Trump administration—which too must divert scarce governmental resources to respond to and hear the suit. Stanford Law School professor Michael McConnell told CNN, “The idea that a group has standing because it has to spend time on this more than other things is just so silly that I can’t believe they put it on paper.”

Well before Michel v. McConnell, the Supreme Court had “repeatedly held that such a ‘generalized grievance,’ no matter how sincere, is insufficient to confer standing.” And in Clapper v. Amnesty International USA (2013), Justice Samuel Alito wrote that plaintiffs “cannot manufacture standing merely by inflicting harm on themselves.”

The lawyers at CREW seek to avoid Michel’s fate by arguing that they are not suing as individuals, but as an organization. They base their argument on two cases: Havens Realty Corp. v. Coleman, a 1982 Supreme Court decision, and Ragin v. Harry Macklowe Real Estate Co., a 1993 opinion of the U.S. Court of Appeals for the 2nd Circuit.

Neither does the job.

Both cases arose under the Fair Housing Act of 1968, in which Congress sought to end racially segregated housing. The law authorized citizens to bring civil lawsuits and lowered ordinary standing requirements in order to more liberally enforce remedial policies.

In Havens Realty Corp., Justice William Brennan, writing the majority opinion, stated that “Congress intended standing under [the law]” to be lax, and “[w]ith this understanding,” found that a small nonprofit, Housing Opportunities Made Equal (HOME), had standing to sue the Havens Realty Corp. One of the latter’s employees denied housing to the former’s client on the basis of race, which compelled HOME employees “to devote significant resources to identify and counteract … racially discriminatory steering practices”—not to its ordinary “counseling and referral services.”

The very discrimination the law barred was hitting HOME’s bottom line, and HOME asked the court only to return “lost” funds and litigation expenses.

CREW’s lawyers, by contrast, argue that they cannot as robustly fulfill their mission to sue other politicians when they voluntarily pay to sue a politician. And unlike HOME’s humble request for sunk costs, CREW seeks broad declaratory and injunctive relief designed to transform novel and far-reaching constitutional theories into binding law.

In a concurring opinion, Justice Lewis Powell provided another reason why CREW’s reliance on Havens is misplaced. The district court had originally dismissed HOME’s lawsuit because the group lacked standing. And by the time their case reached the U.S. Supreme Court, Powell wrote, HOME had advanced only “meaningless averments concerning the disputed question of standing.”

That does not bode well for CREW.

Ragin likewise is of no help to CREW.

Like CREW’s case, Ragin was filed in federal court in the Southern District of New York. There, “individual plaintiffs [testified] that they were offended when they saw” housing advertisements featuring only white models, and filed suit under the same law.

The court saw “no significant difference between the statutorily recognized injury” in Havens and Ragin. In fact, it cited Havens for “the long-held principle that” the kind of injury the Supreme Court found absent in Michel v. McConnell “may exist solely by virtue of ‘statutes creating legal rights, the invasion of which creates standing.’”

Because CREW’s lawyers do not claim that Trump has violated their rights under the Fair Housing Act or any other statute that might grant them standing, it is unclear how these cases support them. The opposite may be true.

A Tidal Wave of Lawsuits

Powell’s concurrence in Havens notes “a high price” to the liberal pleading standard in that case “in terms of a severe imposition on already overburdened federal courts as well as unjustified expense to the litigants.”

If the courts were to change the well-settled standing rules in CREW’s favor, then any organization—and maybe even Michel—could get away with suing any politician or group of politicians because (1) the organization disagrees with them and (2) filing a lawsuit costs money.

If that were so, the judiciary would likely face a tidal wave of lawsuits and few federal policies would ever be implemented without first having to clear hurdles erected by some angry and litigious group or individual (although the Center for Consumer Freedom notes that CREW, for its part, almost exclusively sues Republican officials).

For these reasons, Robert Kelner, a partner at Covington & Burling, said that CREW’s standing claim “barely passes the laugh test,” and “[t]he courts will toss this one out.” Michel v. McConnell shores up that bet. As Powell stated in his Havens concurrence: “One can well understand the impatience of the District Court that dismissed the complaint.”