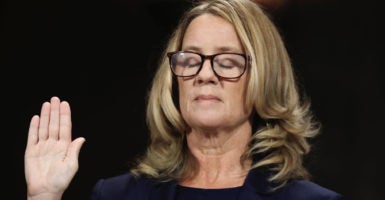 Christine Blasey Ford closes her eyes as she is sworn in before testifying to the Senate Judiciary Committee on Sept. 27. (Photo: Jim Bourg/SIPA/Newscom)

A new letter from a former boyfriend of Dr. Christine Blasey Ford raises questions about claims made by Ford.

The ex-boyfriend, who remains anonymous and said he dated Ford from 1992-1998, wrote that Ford had assisted a friend prepare for a polygraph, had never mentioned the assault she now alleges occurred from Brett Kavanaugh, and had never expressed any concerns about flying. His letter was obtained and reported on by Fox News Thursday night.

Specifically, the ex wrote that Ford helped a “life-long best friend,” Monica L. McLean, who was “interviewing for jobs with the United States Attorney’s Office and the FBI,” prepare for a possible polygraph exam. McLean has denied that Ford assisted her.

“I witnessed Dr. Ford help McLean prepare for a potential polygraph exam,” the former boyfriend wrote. “Dr. Ford explained in detail what to expect, how polygraphs worked and helped McLean become familiar and less nervous about the exam. Dr. Ford was able to help because of her background in psychology.”

Ford told The Washington Post in a story published Sept. 16 that Kavanaugh, now 53, held her down, groped her, and tried to remove her clothes in a bedroom during a house party in the early 1980s in Montgomery County, Maryland.

Ford previously told the Senate Judiciary Committee during hearing on Thursday with Rachel Mitchell, a sex crimes prosecutor who questioned Ford, that she never helped anyone prepare for a polygraph test. Via a Bloomberg Government transcript, here’s that exchange:

MITCHELL: Have you ever had discussions with anyone, beside your attorneys, on how to take a polygraph?

MITCHELL: And I don’t just mean countermeasures, but I mean just any sort of tips, or anything like that.

FORD: No. I was scared of the test itself, but was comfortable that I could tell the information, and the test would reveal whatever it was going to reveal. I didn’t expect it to be as long as it was going to be, so it was a little bit stressful.

MITCHELL: Had—have you ever given tips or advice to somebody who was looking to take a polygraph test?

McLean, a retired FBI agent, has released a statement denying that Ford helped her at all in preparing for the polygraph test.

“I have NEVER had Christine Blasey Ford, or anybody else, prepare me, or provide any other type of assistance whatsoever in connection with any polygraph exam I have taken at anytime,” McLean said, per Mediaite.

The full details of Dr. Ford’s polygraph are particularly important because the Senate Judiciary Committee has received a sworn statement from a longtime boyfriend of Dr. Ford’s stating that he personally witnessed Dr. Ford coaching a friend on polygraph examinations. When asked under oath in the hearing whether she’d ever given any tips or advice to someone who was planning on taking a polygraph, Dr. Ford replied ‘never.’ This statement raises specific concerns about the reliability of her polygraph examination results. The Senate therefore needs this information.

Ford’s former boyfriend also wrote that she never expressed fear of flying. Reportedly, a discomfort with flying factored into Ford’s reluctance to come to Washington, D.C., to testify.

“While visiting Ford in Hawaii, we travelled around the Hawaiian islands including one time on a propeller plane,” the former boyfriend wrote. “Dr. Ford never indicated a fear of flying.”

The former boyfriend also disclosed in the letter that he ended his relationship with Ford after finding out that she had been “unfaithful” to him.

After breaking up with her, he took her off the credit card they shared.

“ … Nearly [one] year later, I noticed Dr. Ford had been charging the card, and charged about $600 worth of merchandise,” the former boyfriend wrote. “When confronted, Dr. Ford said she did not use the card, but later admitted to the use after I threatened to involve fraud protection.”

Ford’s former boyfriend also wrote that he did not want to become involved in the investigation, “but wanted to be truthful about what I know.”