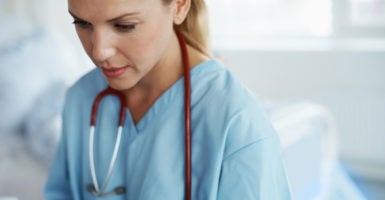 A Utah nurse refused a detective's demand to draw blood from an unconscious man, and was hauled away in handcuffs. (Photo: iStock Photos)

On July 26, Alex Wubbels was just trying to protect her patient by following a longstanding hospital policy—one she rightly understood to reflect the protections of the Fourth Amendment.

She was rewarded with handcuffs and a seat in the back of a police cruiser.

Wubbels, a former Olympic athlete and current head nurse of the University of Utah’s burn unit, appears to be the unfortunate victim of an overbearing law enforcement officer who either didn’t know the law or purposely misstated it.

According to reports, local authorities sent Detective Jeff Payne to the hospital’s burn unit to collect blood from a patient in order to test for the presence of illicit substances. The patient, a trucker who had been severely injured after being hit head-on by a truck fleeing police officers, was not suspected of a crime.

The man who caused the accident did not survive.

Over the last week, video has surfaced from this incident in the burn unit. The video, taken from the body camera of a Salt Lake City police officer, appears to show Wubbels’ arrest for refusing to allow a warrantless blood draw from an unconscious patient.

In the video, Wubbels calmly informs Payne that, under hospital policy, she cannot allow the blood draw to take place unless officers were placing the patient under arrest, had a warrant for the procedure, or acquired patient consent.

Because none of those conditions was met, Wubbels declines to allow the procedure on the unconscious victim.

When Payne insists he be permitted to draw blood from the victim regardless of hospital policy, Wubbels calls her supervisor. In the video, the supervisor can be heard on a speakerphone confirming hospital policy about when law enforcement blood draws can take place.

At this point, Payne grows increasingly frustrated and soon grabs at Wubbels to place her in handcuffs. For the remainder of the 19 minutes of footage, Wubbels sits handcuffed in the back of a cruiser.

The detective later stated that his watch lieutenant had advised him to arrest Wubbels for interfering in a police investigation. Throughout the video, he defends his authority to demand a blood draw by referring to “implied consent law” and “exigent circumstances.”

Wubbels ultimately was not charged with a crime, but the video has rightly raised a number of legal concerns about the detective’s actions.

Was the Detective Correct About His Authority?

No, he was not. Without mincing words, there does not seem to be a legal justification under Utah law for Payne’s assertions that he had authority to draw the unconscious patient’s blood without a warrant.

The Fourth Amendment protects “[t]he right of the people to be secure in their persons … against unreasonable searches and seizures.”

The Supreme Court has routinely upheld the principle that warrantless searches are per se unreasonable unless they fall into one of several narrow exceptions. Essentially, where police can feasibly obtain a warrant prior to conducting a search, they should.

It is a longstanding rule that drawing blood is a “search” within the meaning of the Fourth Amendment. Why? Because in the language of Missouri v. McNeely, “an invasion of bodily integrity implicates an individual’s most personal and deep-rooted expectations of privacy.”

In the 2016 decision in Birchfield v. North Dakota, the Supreme Court reinforced its disfavor for warrantless blood draws. It struck down state “implied consent” laws criminalizing a DUI suspect’s refusal to submit to mandated blood testing, stating only the most exigent of circumstances could allow for the warrantless invocation of such an invasive procedure.

It is likely that Payne was referring to these unconstitutional laws when he stated he had “implied consent” from the patient. This invalid defense is even more disconcerting given the fact that the patient at issue was not even suspected of a crime, much less under arrest for driving while intoxicated.

Even if implied consent laws were still valid post-Birchfield, they would hardly be applicable in this situation.

Without a warrant, there are two ways Payne could have legally conducted a search of Wubbel’s patient. First, the patient could voluntarily allow his blood to be drawn. But because the patient was unconscious, this wasn’t feasible.

Second, as Payne suggests in the video, there is an exception for “exigent circumstances.”

This exception, outlined in Schmerber v. California, requires probable cause to place the patient under arrest for a crime, and a reasonable belief that delaying the search to obtain a warrant would destroy evidence of that crime.

But Payne readily admitted the patient was not under arrest and was not suspected of a crime. Further, the only criminal suspect in the crash was dead.

It remains unclear why officers thought a test for illicit substances from the victim was needed for a criminal investigation, or whether there was probable cause to believe such substances would be found. Payne can be heard repeatedly stating it was “to protect the patient.”

Taking Payne at his word, these good intentions are not enough to justify a very personal invasion of privacy by a government official on an unconscious patient.

Was the Detective Justified in Arresting Wubbels for Interfering?

Probably not. The detective indicates Wubbels is interfering with a police investigation, but there are two notable problems with this assertion.

First, Utah Code § 76-8-306 makes it a crime to commit certain actions “with the intent to hinder, delay, or prevent the investigation … of any person regarding conduct that constitutes a criminal offense.”

These actions can include using force, intimidation, or deception to prevent the discovery of evidence, as well as refusing to release information after being ordered to do so by a judge.

Neither of these clauses is applicable to Wubbels. She was courteous and professional with the officers at all times, clearly explained an existing hospital policy, and the most force she exhibited was an adamant “no” to an officer’s request that she violate that policy.

Further, a court order was precisely what she asked to receive, not what she tried to evade.

Second, lawmakers almost certainly did not intend statutes like § 76-8-306 to be used to arrest nurses simply trying to do their jobs with honesty and integrity. These statutes are, rather, meant to punish those who purposefully attempt to hinder investigations, destroy evidence, or otherwise make it easier for someone to escape criminal liability.

Officers rightly have discretion in determining who to arrest and under what laws. It is important, however, that this discretion not be abused to turn laws into weapons of technicality, forging the language to fit whatever situation is at hand even if it does not encompass the actions legislators intended to punish.

Such abuse undermines public trust in the law itself because it twists the just foundations on which the law rests.

What Can the Public Take Away From This Incident?

Sometimes, law enforcement officers get it wrong. Sometimes, they are unprofessional, authoritarian, and blatantly abusive of the law. When this happens, society should call a spade a spade, even if it risks turning into an unjustifiable parade of “cop-bashing.”

But perhaps the most important lesson from this incident can be found not in any legal analysis, but from Wubbels’ admirable response to being mistreated.

In a world where it is all too easy to riot in the streets and cause civil unrest in protest of the police, Wubbels refused to focus on retribution. She told reporters she wants “to see people do the right thing first, and I want this to be about civil discourse.”

While she has not ruled out legal action if significant policy changes are not made, Wubbels appears genuinely concerned with something much more important than lawsuits: civil discussion about what is right.

That’s an example every American can learn from.