Why Another FBI Investigation of Kavanaugh Would Be Pointless 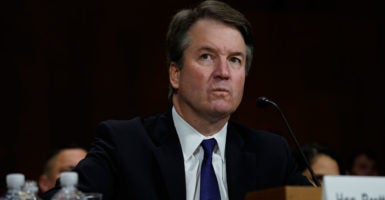 Campaigns of whatever sort often adopt a mantra, a phrase, or even a single word that’s repeated over and over to advance the campaign’s goals. The campaign against Supreme Court nominee Brett Kavanaugh is no different, and its latest mantra is “FBI investigation.” Let’s look at this mantra’s objectives and its validity.

The call for another FBI investigation, which dominated the Sept. 27 hearing about Dr. Christine Blasey Ford’s sexual assault allegation against Kavanaugh, appears to have multiple partisan objectives, based on statements made by those opposed to his confirmation.

First, Kavanaugh’s opponents have expressed hope that the continued controversy will help defeat the nomination. Barring that, they have indicated that they want to drag the process out at least past Election Day. Third, according to Sen. Mazie Hirono, D-Hawaii, Democrats would keep this seat open until President Donald Trump leaves office if they win control of the Senate in the upcoming election.

This demand for another FBI investigation is not valid and based on a complete misunderstanding of the bureau’s role. First, Kavanaugh’s opponents want people to think that the FBI is on standby, ready to run down all the leads and figure out what really happened.

That may be what a law enforcement agency does in the criminal justice system—as seen on TV—but not in the confirmation process.

In the criminal justice system, the FBI investigates by not only gathering information but evaluating it, making judgments about the credibility of witnesses or the truth of what they say, pursuing leads, and offering conclusions or even recommendations. In other words, they figure out what really happened.

In the confirmation process, the FBI gathers information and stops there. The Senate must do the rest. In fact, as CBS News recently described it, the FBI “conducts a background check at the request of the White House, mainly to determine whether the nominee would pose a risk to national security interests of the United States, according to the Justice Department.”

That has already been done. It’s worth noting that this “full-field” FBI investigation has been conducted every time Kavanaugh was hired or appointed to a significant government position. Six times between 1993 and 2018, the FBI went talking to people about Kavanaugh. Six times, all after the incident that Ford alleges, the FBI never heard anyone even whisper a word about sexual misconduct.

Kavanaugh’s opponents not only want people to think that the FBI has a criminal justice role in the confirmation process, but they mislead people to think that if the FBI does not jump in, there will be no investigation of Ford’s allegation. The people actually responsible for investigating these allegations are the Judiciary Committee’s own investigative staff and they have been hard at work for nearly two weeks. The list of steps they have taken is nearly six pages long.

Well, not all of them. Democratic staff, for example, refused to participate in the Sept. 17 interview with Kavanaugh. Democrats say they want the FBI to interview Mark Judge, who Ford says participated in assaulting her but who denies even being present. But, unlike Republican staff, Democratic staff have never sought to speak to him themselves.

Judiciary Committee investigators, by the way, come armed with a federal law that can imprison liars for five years. That’s what Kavanaugh meant at the hearing when he said he and others had provided statements “under penalty of felony.”

But, say Democrats, the FBI was directed to investigate Anita Hill’s sexual misconduct allegations against Clarence Thomas in 1991. Here’s how that scenario played out.

During the Judiciary Committee’s Sept. 10-13 confirmation hearing, Hill provided a vague statement alleging unspecified misconduct by Thomas but insisted that she remain anonymous and that Thomas not be informed.

The FBI gathered information from Sept. 23-26 and submitted a report to the Judiciary Committee. Hill’s allegations did not become public until that FBI report was leaked to the media on Oct. 6, after the Judiciary Committee voted on the nomination. Only then did the committee meet again and hear testimony from Hill, Thomas, and others.

It’s a very different situation today. Ford’s allegations are already public, the Judiciary Committee staff has been investigating for nearly two weeks, and a hearing on the allegations has already taken place. Some additional information-gathering by the FBI simply cannot provide anything that the process has not already uncovered and thoroughly examined.

The mantra of “FBI investigation” by Kavanaugh’s opponents is misleading in its purpose and has no validity. The confirmation process is already structured and equipped to evaluate even unexpected allegations as they arise and will do so as, in Kavanaugh’s case, it nears a conclusion.