With US and British Support, Ukraine Pushes Back on Russian Aggression in the Sea of Azov

KYIV, Ukraine—The U.S. Coast Guard was set to hand over two of its decommissioned 110-foot armed cutters to Ukrainian President Petro Poroshenko at a ceremony Thursday in Baltimore.

The move comes amid escalating tensions between Russia and Ukraine over the free movement of merchant ships to Ukrainian ports in the Sea of Azov.

“The transfer of these vessels is the latest example of America’s long-standing effort to help Ukraine defend its sovereignty and territorial integrity,” Robert Karem, assistant secretary of defense for international security affairs, told The Daily Signal in an emailed statement.

Ukraine’s navy will take possession of the two U.S. patrol boats, Ukrainian defense officials say, reflecting a recent shake-up in which the country’s military chain of command has taken over from the border guard in defending the country’s southern coastline.

That shift in authority underscores how Russia’s aggression in the Sea of Azov has spurred Ukraine to shore up its defenses against the threat of a Russian amphibious invasion from either the Sea of Azov or Black Sea.

“The Kremlin has no intention to stop. Having occupied Crimea, it now aims at occupying the Sea of Azov between Ukraine and Russia,” Poroshenko said to the United Nations General Assembly on Wednesday.

In April, Russian naval forces in the Sea of Azov—including submarines—stepped up the harassment of merchant vessels traveling to and from Ukrainian ports in the shallow water sea. 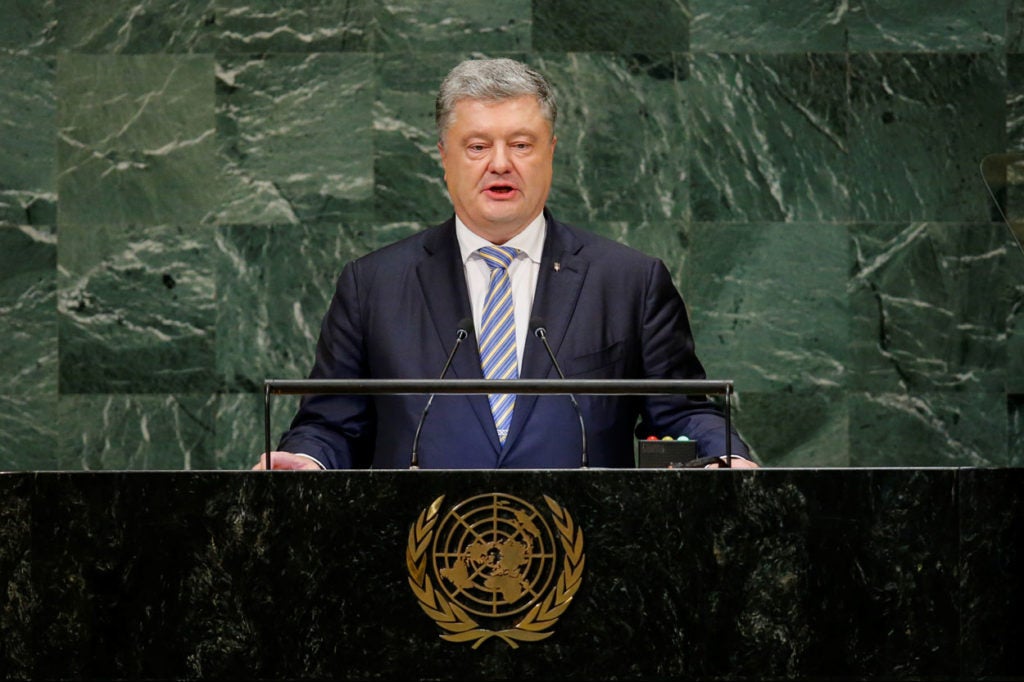 The Russian harassment operations became so pervasive that by July many Ukrainian and American officials said it was tantamount to a blockade. For its part, Moscow denies any wrongdoing and claims it has a legal right to conduct such naval operations to defend its “exclusive economic zone” in Crimea.

The twin American Island-class cutters due for delivery to Kyiv—the Drummond and the Cushing—are typically armed with a 25 mm machine gun, two .50-caliber machine guns, and other small arms. The U.S. Coast Guard used the patrol boats for myriad operations, including drug interdiction missions.

The Coast Guard cutters will undergo an extensive five-month refurbishment at the Coast Guard yard in Baltimore, Pentagon spokesman Eric Pahon told The Daily Signal. Following this refurbishment, the Coast Guard will provide approximately three months of training, including at sea, for two Ukrainian crews totaling about 35 sailors.

“The U.S. is providing a full support package, to include spare parts, with these ships,” Pahon said.

The U.S. cutter deal is also part of a broader NATO effort to shore up Ukraine’s maritime defenses.

Williamson said the move was meant to help train the Ukrainian military as well as to build up its naval forces, British agencies reported. The defense secretary also said the U.K. would conduct more naval patrols in the Black Sea in 2019.

U.K. military units have been in Ukraine training the country’s armed forces since 2015.

Ukraine and Russia are already at war along a 250-mile-long, entrenched front line in Ukraine’s southeastern Donbas region. There, for four and a half years Ukrainian forces have been in daily combat against a combined force of Russian regulars, Russian-backed separatists, and foreign mercenaries.

Despite a 2015 cease-fire, known as Minsk II, the war stills simmers with daily shelling and small arms gunfights. Last week alone, international cease-fire monitors recorded more than 5,500 cease-fire violations along the Donbas front line. Each violation, it should be said, does not comprise a single shot fired but can comprise an artillery barrage or a gun battle.

“Russia occupies Crimea and fuels conflict in the Donbas in its attempt to change borders by force,” Karem said. “Since 2014, the U.S. has committed more than $1 billion in security assistance to build the defensive capabilities of Ukraine’s forces and enhance interoperability with NATO.”

Beginning in July, Poroshenko kick-started a plan to build up Ukraine’s naval strength and harden its coastal borders.

Ukraine has since announced the creation of a new Marine brigade to defend its southern coastlines. And on Sept. 17, Kyiv unveiled a plan to stand up a new naval base on the Sea of Azov to “repel the aggressive actions in the region by the Russian Federation,” Kyiv said in a statement.

So far this summer, Ukraine has launched two of its new Gyurza-M class gunboats to the Sea of Azov region.

Only Russia and Ukraine have coastlines on the Sea of Azov—a shallow-water sea through which roughly 80 percent of Ukraine’s exports pass and with vast untapped gas deposits that have yet to be claimed by either Russia or Ukraine.

The only way for ship traffic to enter the Sea of Azov is from the Black Sea through the Kerch Strait. In May, Russia opened a bridge over the Kerch Strait chokepoint. True to form, Russian President Vladimir Putin drove a big rig over the new bridge to mark the unveiling.

The bridge created a land transportation route from mainland Russia to Crimea, the Ukrainian peninsula that Russia invaded and annexed in 2014. Prior to the bridge’s opening, land traffic could only enter Crimea through Ukrainian territory.

Russia’s Kerch Strait bridge was immediately seen by Ukraine and its allies in the West as a threat to the free flow of maritime traffic into the Sea of Azov. 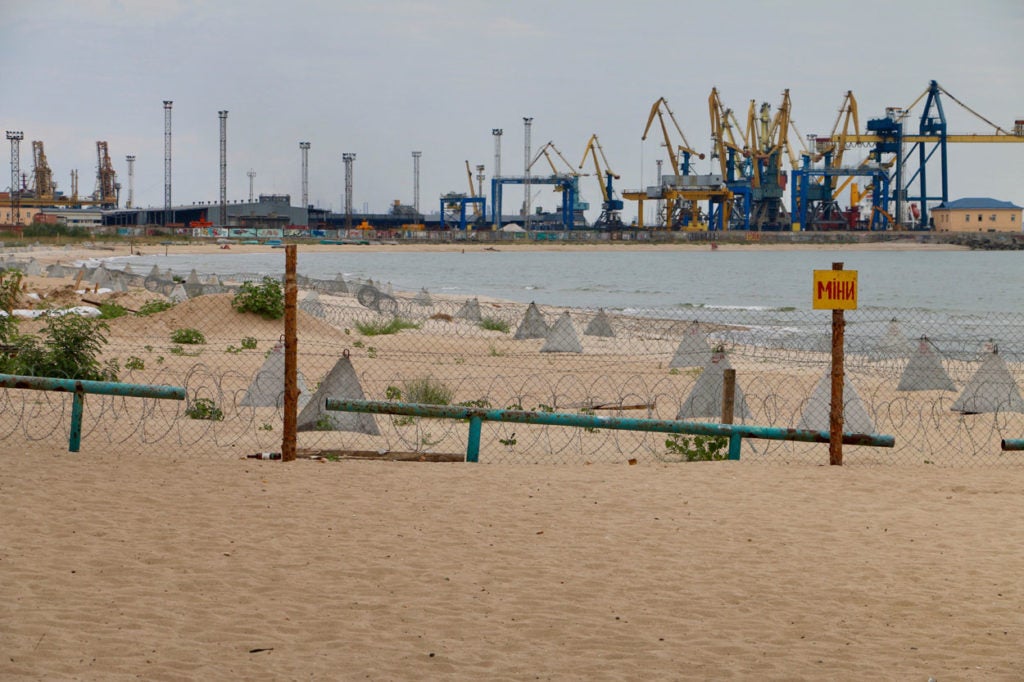 A Ukrainian minefield in the Ukrainian port city of Mariupol on the Sea of Azov. (Photo: Nolan Peterson/The Daily Signal)

“This bridge is not just a bridge. This is a tool for economic and political pressure on Ukraine,” Ukrainian Infrastructure Minister Volodymyr Omelyan said during a May 16 Cabinet meeting—the day after the Kerch Strait bridge opened.

For one, the bridge was too low—some Ukrainian vessels have had to cut down their radio antennas to pass under it. More of a concern for Kyiv, however, was the uptick in Russian harassment against Ukrainian ships passing under the bridge.

“Having illegally constructed a bridge across the Kerch Strait, Russia launched a systematic disruption of freedom of international navigation through the Kerch Strait for Ukrainian and foreign ships,” Poroshenko said to the U.N. General Assembly on Wednesday.

On Sept. 20, the two Ukrainian naval vessels, the Donbas and the Korets, left the port of Odesa on the Black Sea. (Both ships were seized by Russian forces during the 2014 invasion and annexation of Crimea. The Kremlin later returned the ships to Ukraine.)

On Sept. 23, Russian vessels escorted the Ukrainian ships “under complicated circumstances” as they passed through the strait, Ukraine’s navy reported.

According to Ukrainian news reports, a U.S. Air Force RC-135V surveillance aircraft was flying near the Kerch Strait on Sept. 23 as the Ukrainian ships made the crossing.

Meanwhile, Russian warplanes reportedly buzzed the two Ukrainian navy ships. According to a statement from Ukraine’s navy, “Aircraft of the aggressor state flew around the vessels several times including at an extremely low height.”

Once through the Kerch Strait, the two Ukrainian navy ships were met by a pair of armored Ukrainian Gyurza-M class gunboats, the Kremenchuk and the Lubny, which served as escorts. On Sept. 25, the four vessels steamed into the Ukrainian port of Mariupol.

The whole exercise underscored the burgeoning crisis between the two erstwhile Soviet allies over the right of free movement through the Sea of Azov. It was also a public relations victory for Ukraine. News of the Ukrainian ships’ Kerch Strait crossing lit up across Ukrainian social media throughout the week.

“One can only be glad that this bold and timely adventure (in the good sense of the word) has succeeded in all respects, the Russians have somehow lost their confidence, and the Navy began to act proactively and to surprise with unexpected … moves,” Roman Kulyk, a 27-year-old company commander in the Ukrainian army, wrote on Facebook about the crossing.

“Such brutal actions must be rejected as illegal, including under the U.N. Convention on the Law of the Sea. They require a strong response, including an enhanced sanctions policy and other targeted measures,” Poroshenko said.

Ukrainian and Western military experts alike worry that tensions in the Sea of Azov could widen or escalate the ongoing land war in the Donbas.

“The Kremlin is trying to undermine our values, destroy our way of life, and reverse the outcome of the Cold War. Its behavior only increases the risk of miscalculation and the prospect of crisis turning to chaos,” said Williamson, the British defense secretary, in an interview with British media last week after he announced the deployment of Royal Marines to Ukraine.