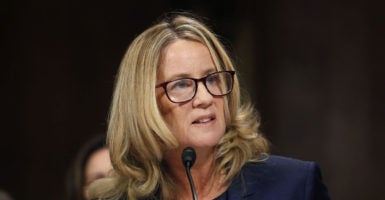 "I am an independent person, and I am no one’s pawn": Christine Blasey Ford testifies Thursday before the Senate Judiciary Committee. (Photo: Jim Bourg/Sipa/Newscom)

Christine Blasey Ford called Supreme Court nominee Brett Kavanaugh “the boy who sexually assaulted me” as she presented her story Thursday to the Senate Judiciary Committee.

Kavanaugh rebutted the allegation at length later in the afternoon.

Ford, 51, alleged that an intoxicated Kavanaugh attempted to sexually assault her at a party in summer 1982, when the two were teenagers. Kavanaugh, 53, repeatedly has denied the allegation.

Since the research psychologist and college professor’s allegation went public less than two weeks ago, two other women have accused Kavanaugh of sexual misconduct.

Senate Judiciary Chairman Charles Grassley, R-Iowa, said he unsuccessfully sought to gain testimony and evidence from the two other women.

Grassley noted that the FBI has conducted six background checks on Kavanaugh because he has worked in the White House and was nominated to a federal appeals court judgeship in 2003.

“Nowhere in any of these six FBI reports … was there a whiff of any issue, any issue at all related in any way to inappropriate sexual behavior,” Grassley said.

A vote by the Judiciary Committee on sending the nomination to the full Senate was expected Friday.

Here are five key moments from Ford’s portion of the hearing before the committee’s 11 Republicans and 10 Democrats.

1. Characterizing Others at Party

During her opening remarks, Ford said Kavanaugh classmate Mark Judge was in an upstairs bedroom with Kavanaugh during the alleged drunken assault.

She said Leland Ingham Keyser and Patrick J. Smyth, who she remembered only as “P. J.,” also were at the gathering of teens.

Everyone Ford identified has provided a statement, under penalty of a felony, that they have no memory of the gathering.

Rachel Mitchell, the Arizona sex crimes prosecutor tapped to conduct questions on behalf of the committee’s Republicans, asked Ford about the statements.

“I could take those one at a time,” Ford said. “Leland has significant health challenges, and I’m glad she’s focusing on herself and getting the health treatment that she needs and she let me know she needed her lawyer to take care of this for her. She texted me right afterward with an apology and good wishes.”

Of the others, Ford said:

I don’t expect that P.J. and Leland would remember this evening. It was a very unremarkable party. It was not one of their more notorious parties. Nothing remarkable happened to them that evening. They were downstairs. Mr. Judge is a different story. I would expect that he would remember.

Judge is now a writer whose work has appeared in conservative publications.

Democrats repeatedly said the committee should have compelled Judge to testify, although he signed the legal statement.

Though it has been widely reported that Grassley was willing to send a staffer from the Judiciary Committee to California to interview Ford, she said she wasn’t clear that was the case.

Ford reportedly said she initially didn’t want to fly to Washington because the incident had made her claustrophobic. She said she has coped with “anxiety, phobia, and PTSD-like symptoms … more specifically claustrophobia, panic.”

She said she traveled to Washington via airplane.

“I was hoping they would come to me. But I realized that was an unrealistic request,” she said.

“Certainly, I was hoping to avoid getting on an airplane, but I eventually was able to get up the gumption and get on the plane,” Ford said.

Mitchell asked: “You have to fly for your work? Is that correct?”

“It’s easier for me to travel going that direction when it’s a vacation,” Ford said.

3. Questions About the Polygraph

However, this became a major point of question.

The polygraph test concluded she was telling the truth, according to the expert who conducted it.

Ford said she took the polygraph test in a conference room of a hotel near Baltimore-Washington International Thurgood Marshall Airport, either on the day she attended her grandmother’s funeral or the next day.

Mitchell: “Did you pay for the polygraph yourself?”

Mitchell: “Do you know who paid for it?”

About a half hour later, after a break, one of Ford’s lawyers, Debra Katz, jumped in to say that “her lawyers paid for” the polygraph test.

Her lawyers at the hearing said they are representing Ford without charge.

4. Timing of the Revelations

After testimony seemed to have ended in the Kavanaugh confirmation hearings and a week before a scheduled vote by the Judiciary Committee, Feinstein, D-Calif., the committee’s ranking member, issued a press release with vague allegations.

During the hearing Thursday, Sen. Dick Durbin, D-Ill., accused the Republican majority of obstructing an investigation into allegations against Kavanaugh.

Grassley shot back to Durbin that the opposite was true:

You talked about the obstruction from the other side. I cannot let it go by what you’ve heard me say so many times, that between July 30 and Sept. 13 there were 45 days this committee could have been investigating this situation and her privacy would have been protected. So, something happened here in between on your side that the whole country should not have known about. We should have investigated it.

Grassley said that after four days of hearings, “at the 11th hour, the ranking member [Feinstein] referred [the confidential allegation] to the FBI, then the name leaked.”

Feinstein responded: “I did receive a letter from Dr. Ford. I held it confidential up until a point where the witness was willing to come forward.”

“We are here to decide whether to evaluate a nominee to the Supreme Court,” Feinstein said in opening remarks. “This is about the integrity of the institution. This is not a trial for Dr. Ford, this is a job interview for Judge Kavanaugh.”

Later in the hearing, Mitchell asked Ford: “Did you ever give Sen. Feinstein or anyone else the permission to release that letter?”

“No, not that I know of,” Ford answered.

She said repeatedly that she didn’t think the July 30 letter she sent to Feinstein would be made public.

Ford asserted that she is not being political.

“I’ve seen my life picked apart by people on TV, on Twitter, and people in this body,” Ford said. “I have been accused of acting out of partisan political motives. Those who say that do not know me. I am an independent person, and I am no one’s pawn.”

While she asked to remain anonymous in her letter to Feinstein, and left an anonymous tip with The Washington Post, Ford said, she didn’t want to go public.

But she said she eventually was smoked out by the media as Kavanaugh’s nomination advanced.

“When he was selected, it seemed [Kavanaugh] was popular and was a sure vote,” Ford said. “I was calculating daily the risk-benefit for me, and wondered if I was just going to be jumping in front of a train that was heading where it was heading anyway.”

Ultimately, because reporters were sitting outside of my home trying to talk to my dog through the window, to calm the dog down. And a reporter appeared in my graduate classroom and I mistook her for a student. And she came up to ask me a question, and I thought she was a student and it turned out that she was a reporter.

So, at that point, I felt like enough was enough. People were calling my colleagues at Stanford and leaving messages on their voicemails and on their email saying they knew my name. Clearly people knew my address, because they were out in front of my house. And, [with] the mounting pressure, it seemed like it was time to say just what I needed to say.

Ford told the committee that when she was 15 and Kavanaugh was 17, he pinned her to a bed in an upstairs bedroom during the gathering at a house, groped her, and tried to remove her clothes while another teenage boy, Judge, watched.

Kavanaugh and Judge both have said this incident did not occur.

Ford described both boys as drunk and laughing. She also said she was afraid that Kavanaugh might accidentally kill her when he put his hand over her mouth to stop her from yelling for help.

“He tried to remove my clothes,” she said. “He had a hard time because he was very inebriated and because I had a one-piece bathing suit under my clothing.”

At the time, she said, “I didn’t want to tell my parents when I was 15 in a house with no adults and drinking beer with boys.”

Sen. Patrick Leahy, D-Vt., asked Ford what she remembered most strongly about the incident.

“Indelible in the hippocampus is the laughter, the uproarious laughter between the two, having fun at my expense,” Ford replied.

Ford replied: “The stairwell, the living room, the bedroom, the bed, the bathroom in close proximity, the uproarious laughter, the multiple attempts to escape, and the final ability to do so.”

Durbin asked: “To what degree of certainty do you believe Brett Kavanaugh assaulted you?”

Ford said she didn’t tell anyone details of the attack until May 2012, other than her husband when the two were in counseling.

“I am here today not because I want to be,” Ford said. “I am terrified. I am here because I believe it is my civic duty to tell you what happened to me while Brett Kavanaugh and I were in high school.”

Ford said she had met Kavanaugh through a mutual friend, and at the time she swam almost daily at Columbia Country Club in Chevy Chase, Maryland.

“I don’t have all the answers, and I don’t remember as much as I would like to,” Ford said. “But the details about that night that bring me here today are the ones I will never forget.”

She called it her “civic duty” to present what she remembers.

She said she saw Judge “six to eight weeks later” when he was working at an area Safeway grocery store.

“I said hello to him and his face was white and very uncomfortable saying hello back,” she recalled.