How Congress Can Make Tax Cuts Permanent Without Worsening the Debt 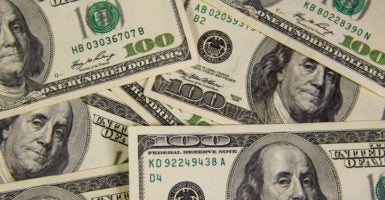 Implementing tax policies proposed in the Heritage Foundation’s Blueprint for Balance would more than offset the 10-year drop in revenue as a result of Tax Reform 2.0. (Photo: OlyaSolodenko/Getty Images)

The economy is thriving under the Tax Cuts and Jobs Act. Wages are up, scores of jobs are being created, and small businesses are more optimistic than ever about the future.

Even so, those benefits would be limited if policymakers fail to address the unsustainable mountain of debt we have already taken on. This part is critical because left unaddressed, the debt will inevitably lead to either an economic crash or decades of economic malaise.

The root problem is not low taxes. After all, the IRS collected record revenue in fiscal year 2018. The problem is excessive government spending, and no amount of tax increases can fix that.

The Heritage Foundation’s Blueprint for Balance shows how this can be done. The blueprint would achieve an extra $735 billion in additional tax revenues by eliminating narrowly targeted and inappropriate tax credits, or disguised spending, in the tax code.

Getting rid of these credits would more than cover the estimated $657 billion drop in revenues over 10 years that would result from Tax Reform 2.0. Other measures would also help with this, like fully eliminating the state and local tax deduction so that people earning the same incomes across America pay the same in federal taxes.

Replacing this deduction and other narrow and inefficient tax credits with broad-based, pro-growth measures contained in Tax Reform 2.0 would achieve all the benefits of tax cuts without incurring the consequences and risks of higher debt.

An even better proposal would be to simply cut spending and use the tax savings described above to lower taxes even further.

Tax Reform 2.0 would solidify our economic growth and give a boost to working Americans. But regardless of whether or not Congress enacts it, and regardless of the revenue impact, one thing remains certain: Our current deficits are unsustainable.

If lawmakers want to prevent an eventual economic crash or a long period of meager or negative economic growth, they will need to reassess the size and scope of the federal government.

The Heritage Foundation’s Blueprint for Balance gives Congress specific ways that it can reduce spending by $12.3 trillion over the next decade, balance the budget by 2025, and cut the projected debt by 23 percent in 2028.

Tax Reform 2.0 has the potential to give our economy a significant long-term boost. To realize this full potential without future tax increases, lawmakers should couple Tax Reform 2.0 with commonsense tax policies that would get rid of narrow, perverse, and detrimental subsidies and credits in the tax code, as well as instituting structural spending reforms to reduce the size and scope of the federal government.