As Summer Comes to an End, the Economy Is Hot as Ever 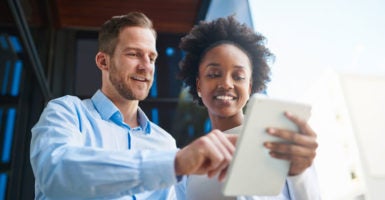 The economy outpaced expert predictions in the month of August. (Photo: Peopleimages/Getty Images)

The Bureau of Labor Statistics announced another solid jobs report Friday, reporting that in August, the U.S. exceeded expert predictions by creating 201,000 jobs. The unemployment rate stayed at a near-record low of 3.9 percent.

This year’s string of healthy jobs reports is consistent with other factors that indicate a robust economy. For instance, small business confidence is at its highest level in decades, the factory sector is expanding at the quickest pace in 14 years, and construction spending is up 5.8 percent from this time last year.

Notable details from the August report include:

Another sign of an improving labor market is this year’s shift of 830,000 workers from part-time work to full-time work. While this shift doesn’t affect overall employment numbers, it is a real improvement and reflects the growing strength of the economy.

The manufacturing sector did see a small drop in August of -3,000 jobs after a period of steady gains. The small loss is something to keep an eye on. Though it may be an anomaly, it may also be a harbinger of coming damage from the administration’s anti-growth trade policies.

So far, the pro-growth policies of lower taxes and less burdensome regulation have won out over the job-killing policies of tariffs and trade restrictions, but there’s no guarantee this will remain the case.

In addition to the August numbers, the Bureau of Labor Statistics reported that the change in jobs numbers for June had been revised down from +248,000 to +208,000, and likewise the July numbers were revised down from +157,000 to +147,000. With these revisions, employment gains in June and July combined were 50,000 less than previously reported.

Though the unemployment rate remains low, the labor force participation rate remains relatively steady, dipping from 62.9 percent to 62.7 percent. The labor force participation rate is the percentage of working-age Americans (ages 16-64) who are either working or looking for work. Fast-growing economies frequently bring discouraged workers back into the labor force. This drop is not a good sign, but it is small, and the rate still falls within the range we have seen over the past year.

Businesses expand production and employment when economic conditions are ripe. We see those conditions today. Business confidence and profits are up, which should lead to increased demand for labor and higher wages.

Even though the full impact of this year’s tax cuts have not yet been felt, the average hourly earnings of all employees rose by 10 cents, from $27.06 to $27.16. That represents a 77 cent (2.9 percent) increase over the past year—a very encouraging sign.

The August jobs numbers reflect a robust, growing economy that is lifting up more and more Americans. But to keep the positive moment going, it is important for Congress to pass tax reform 2.0, making the tax cuts permanent, and to rein in spending to avoid crippling deficits.

It is also vital for the administration to reverse its tariff measures, which threaten the manufacturing sector and could make basic goods more expensive for all Americans.