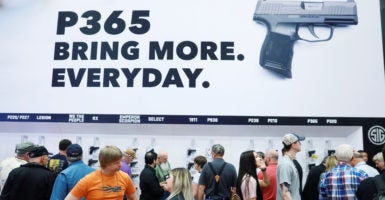 A federal judge has struck down a law banning handgun ads at gun shops as “unconstitutional on its face” and “highly paternalistic.”

California officials had argued that they intended the ban to prevent advertisements from prompting state residents with “impulsive personality traits” to buy more guns, and thereby reduce the risk of “handgun suicide and handgun crime.”

In a ruling Sept. 11, Sacramento-based U.S. District Judge Troy Nunley, who was appointed by President Barack Obama, disagreed with those arguments, writing:

[T]he Government may not restrict speech that persuades adults, who are neither criminals nor suffer from mental illness, from purchasing a legal and constitutionally protected product, merely because it distrusts their personality trait and the decisions that personality trait may lead them to make later down the road.

Nunley added that because the law did not seek to protect gun buyers from misleading advertising, it rests “solely on the offensive assumption that the public will respond ‘irrationally’ to the truth.”

Nunley noted: “Indeed, not only is purchasing a handgun from a licensed dealer lawful, it is constitutionally protected.”

Three gun shops brought the lawsuit after being cited by authorities under the law.

State firearms agency inspectors said the gun shops Ten Percent, Tracy Rifles, and Imbert & Smithers violated the law by displaying handgun ads either in their parking lots or the exteriors of their buildings. The officials required the gun shops to remove the ads or face the possibility of losing their dealer’s licenses.

According to the judge’s ruling, the law states: “No handgun or imitation handgun, or placard advertising the sale or other transfer thereof, shall be displayed in any part of the premises where it can readily be seen from the outside.”

Nunley ultimately found the law to be “overinclusive” because “in the effort to restrict impulsive individuals from purchasing handguns, the [law] has restricted speech to all adults, irrespective of whether they have this personality trait.”

The judge also dismissed the state’s argument that law reduced suicide and violent crime. He ruled that the state offered “mere speculation and conjecture” and “trivial” evidence in attempting to link gun buyers with an impulsive personality trait to those who commit suicide or other crimes.

He criticized the law as “underinclusive,” saying that although the law banned handgun ads at gun shops, it did not ban ads for other types of firearms, nor ads for firearms in general.

Amy Swearer, a legal policy analyst at The Heritage Foundation, said the ruling correctly curbed an example of “government paternalism.”

“The trend toward government paternalism and the distrust of the ability of law-abiding citizens to make responsible decisions is hardly new, especially in California,” Swearer told The Daily Signal.

Nunley noted in his ruling that gun shops “are free to advertise through any other channels of communication.”

“This includes a print advertisement with a map to the store, a billboard with directions to the store (which could be blocks away), or a radio jingle that makes it easy to find the store,” the judge wrote.

The law, he said, would not prohibit an ad in large neon letters reading “GUNS GUNS GUNS” or a billboard advertising handguns located far enough away from a gun shop.

The state of California has other options to prevent handgun violence without violating the First Amendment, the judge indicated.

California law already requires a 10-day waiting period before a buyer can receive a gun. Nunley wrote that the state also could decide to implement an educational program to reduce suicide or other violence using handguns.

As the court explained today, the government cannot censor commercial speech in a paternalistic effort to keep citizens from making unpopular choices—or choices the government doesn’t approve—if they are told the truth.

A spokeswoman for the state attorney general’s office told Fox News that it was reviewing the decision.