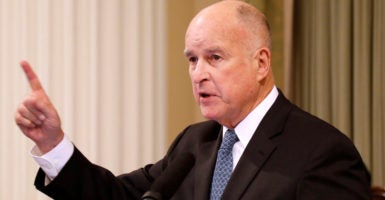 California Gov. Jerry Brown is host of a three-day “Global Climate Action Summit” in San Francisco organized by an “activist donor network” that has burrowed into state government agencies, a climate change skeptic says in a new report.

Chris Horner, a senior fellow with the Competitive Enterprise Institute, is the author of two reports detailing how a well-endowed “climate industry” steers donor money through nonprofit organizations into the offices of state governors and attorneys general.

The relationship between governors and environmental activists who are using governors’ offices to advance the climate change agenda of certain donors is the subject of a report by Horner released Tuesday by CEI, a libertarian think tank in Washington.

“A particular theme slated for the San Francisco event is that President Trump’s promise to withdraw from the Paris climate treaty is isolating the United States from what is otherwise and elsewhere a doable, successful, and economically beneficial adoption of this agenda,” Horner writes.

It views the actions of Brown in California as a case study, examining how elected officials and other political figures allow their offices to be used to pursue climate change policies that conform with the international accord known as the Paris Agreement.

Government officials around the world negotiated the agreement in Paris as part of the United Nations Framework Convention on Climate Change in 2015. The agreement calls on countries to combat the perceived threat of climate change by working to reduce carbon dioxide emissions.

In June 2017, President Donald Trump announced that the U.S. would withdraw from the Paris Agreement, which he said “disadvantages the United States to the exclusive benefit of other countries.”

Trump vowed to withdraw from the Paris Agreement because it is in reality a costly and ineffectual solution to the alleged climate crisis, it mostly directs resources to politically favored industries, and it harms disfavored ones. For similar reasons, the climate industry is dedicated to reversing Trump’s not yet consummated decision.

A major component of its campaign is claiming momentum toward Paris’s goals and rebutting the history of economic and social costs involved in implementing the policies that Paris demands. Implementation of the Paris agenda requires domestic policies, and implementing those policies is the principal objective of the campaign detailed in this paper.

The Daily Signal sought comment from Brown’s office on the new report, but had not received a response at publication time.

The California governor’s three-day summit comes with a budget of $10 million made possible through the support of individuals, foundations, governments and business, according to Horner’s report.

The nonprofits involved “take a handsome percentage for serving as middlemen,” it says.

Emails obtained from open-records requests indicate that politicians are making use of nonprofits and consultants as “pass-throughs for donors to support politicians with resources that the relevant legislatures will not provide and that donors cannot legally provide directly,” Horner’s report says.

The email records describe privately funded staff members placed in governor’s offices as “refugees” from the Obama administration who are working to reposition U.S. policy on climate and energy to conform with their preferred policies.

Horner, author of a 2007 book called “The Politically Incorrect Guide to Global Warming and Environmentalism,” raises several questions in the new report in response to what he uncovered:

Are the donors going to such lengths to avoid 1) directly placing consultants in governors’ offices or 2) giving the money to do so directly to those offices, because they are barred from such placement? If so, why is this permissible? Or is the effort creating middlemen all merely due to appearances? Why do we find participants misleading or telling outright falsehoods when questioned about what we have found?

And the biggest issue of all is, does this represent government for hire?

The “off-the-book” operations detailed in the emails call out for legislative oversight to determine whether they violate state laws, Horner concludes.