This Arms Treaty Is a Pathetic Waste of US Cash. We Should Pull Out. 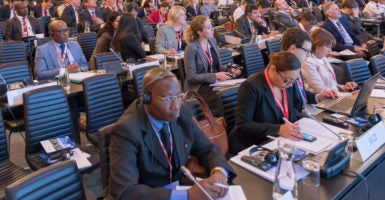 Member states of the Arms Trade Treaty held their first meeting in Vienna in 2015, pictured above. (Photo: Marko Kovic/Sipa/Newscom)

If you were debating the arms trade, what would you want to talk about? Iran’s support for the Houthi rebels in Yemen? China’s sale of arms in Africa? How guns flow from Libya to ISIS?

No, that’s boring. How about debating which bureaucrat should control the travel stipends to attend the debate? That’s the good stuff.

And that, seriously, was the most controversial subject at the the fourth annual meeting of the Arms Trade Treaty, which wrapped up in Tokyo last Friday.

It’s a very American idea that the purpose of diplomacy is to address problems. I know it’s not true, but I still want to believe it.

But in reality, a lot of diplomacy is about virtue signaling. Or traveling to nice places. Or wasting time. Or shopping. Or winning prestige by being in the same room as United States representatives. Or just showing up.

It’s about anything and everything other than being serious.

This year’s meeting was an object lesson in that. Amazingly, it was even about left-wing gender politics. You’d think that, if you were dealing with a subject like the arms trade, you’d want the most experienced people—men or women.

But the meeting promoted “equal” representation—one man, one woman, regardless of expertise. In the eyes of the activists, what you are is more important than what you know. 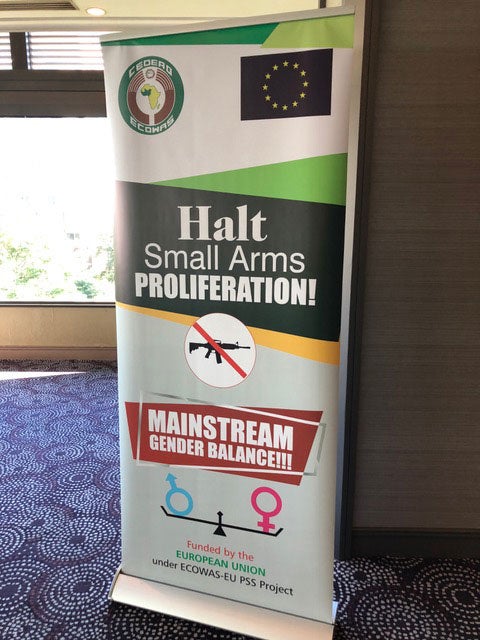 So it’s no surprise that even the core of the treaty isn’t serious. An increasing number of treaty nations don’t pay it the money they owe, or submit the reports they promised to.

The treaty is mostly a failure. Its member nations don’t pay their bills (though the U.S. pays up, to the tune of $90,000 a year) or submit their reports. But one of the few things the progressive activists behind the treaty have on their side is time.

Unlike normal people, they’re happy to sit in a conference room for days on end. And they’re happy to take 1 percent a year. (Well, not happy, really—they complain endlessly. But they know that a percent this year and a percent next year adds up.)

As usual, the meeting’s fireworks all came on the last day, when the final conference report was written. The rough draft wasn’t distributed until Friday morning, even though it was undoubtedly ready weeks in advance. Perhaps this was incompetence, or perhaps it was a plan.

There’s always a tricksy part in a final report at these kinds of conferences. This time, it was paragraph 23, which (in the draft) read that the meeting “endorses the documents listed below, contained as annexes to the report of the Working Group on Effective Treaty Implementation, as living documents of a voluntary nature to be reviewed and updated regularly.”

Do you see the trick?

Some read paragraph 23 as endorsing the idea of having a list of documents on how to implement the treaty. But the more plausible interpretation is that it allows someone—someone who is not identified—to rewrite those documents, and thereby to re-interpret the treaty at will.

Supposedly these documents are “voluntary,”—but they would also have the endorsement, in advance, of the meeting. In other words, they would be approved before they were read, or even written. That’s an approach custom-made for mischief.

At any rate, that was how I read it. And I wasn’t alone. Of the over 30 nongovernmental organizations attending the meeting, only a few weren’t progressives: The Heritage Foundation, the National Rifle Association’s Institute for Legislative Action, the Sporting Arms and Ammunition Manufacturers’ Institute, and Canada’s National Firearms Association.

I’ve worked with the representatives of these organizations for years. And let me tell you, in a room where you’re about as welcome as the proverbial turd in the punch bowl, it’s nice to have a few friends who have their feet on the ground. We few huddled up, found we agreed about the risks of paragraph 23, and took our concerns to the U.S. delegation. 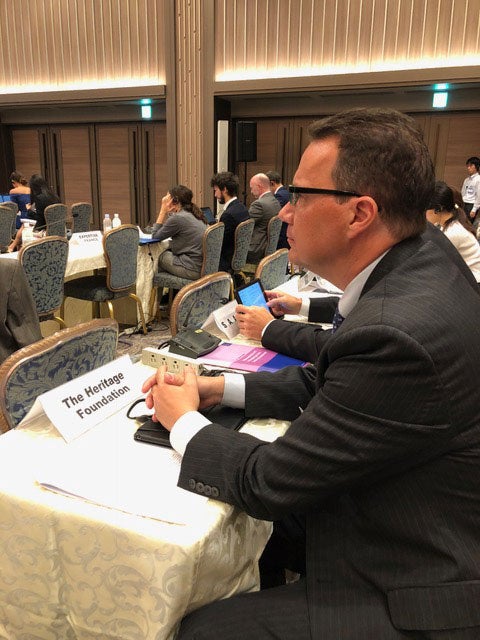 The U.S. said little throughout the week. Our delegation appeared to be working on the assumption that the best thing to do was to remain as inconspicuous as possible, and to encourage everyone else to fight among themselves by not offering an easy American target.

If our goal was to keep the meeting dull, the U.S. has rarely enjoyed such a stunning victory, for much of the meeting was dull indeed. But personally, I don’t see the point of sending four representatives all the way to Tokyo if they are going to say almost nothing, sit in their chairs for Palestinian speeches, and let attacks by name on the U.S. go by without protest.

At least, though, the U.S. did speak up—for the first time in the week—about paragraph 23. The result was far from perfect, but it was still better: “endorses” was changed, and the documents can no longer be re-written at will. This wasn’t a victory. But we did limit the damage—to half a percent, instead of a percent, maybe.

That’s what this is all about from the U.S. point of view: limiting the damage. Next year in Geneva, unless we get out of the treaty in the interim, it will be the same.

That meeting, by the way, was supposed to be in Buenos Aires, but it turned out that Argentina didn’t want to pay the costs of hosting. You might think that those costs would be for things like a conference venue, but the biggest hassle, I was told, is screening the African and Middle Eastern delegates to ensure they’re not terrorists or guilty of genocide. What a world.

And those fellowships? They’re mostly for the Africans, of course. The Europeans wanted the money controlled by the treaty’s secretariat in Geneva; others, led by the Mexicans, wanted the fellowships to stay with the United Nations Development Programme, where they have a bit more pull.

This led to a debate that lasted four hours, and which only ended because the hotel needed its ballroom back. In the end, the conference lived by the golden rule: The Europeans give the gold, so they got to make the rules. The fellowships went to Geneva.

And that sums it up: The biggest squabble of the entire week was about who gets to decide who gets a free trip to Geneva. So much of this is about ensuring that the show goes on.

For example, some of the treaty’s more naïve or guilt-ridden member nations contribute a pile of cash to help the developing nations implement the treaty. Guess how that money is spent?

In the 2018 cycle, one nation asked for help managing its arms stockpiles. Five wanted equipment—a lock for the national armory, that kind of thing. Two wanted help drafting legislation. But 18 wanted to hold a workshop—or, in other words, money for a nice trip and a chat with their friends.

The show must go on.

But it needn’t go on with us. If the Arms Trade Treaty has any effect, it will be in places like the U.S. It is not going to make the incompetent competent, or soften the heart of the Iranians. If it has no effect, it is a waste of our time and money.

Either way, we should get out of it. The farce of Tokyo was proof, if any new proof was needed, that the treaty simply isn’t serious. If other nations want to waste their time on it, fine. But we don’t need to lend our prestige to their folly.