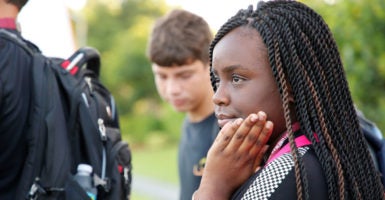 A student is pictured as she waits to cross a street to enter for the first day of classes at Marjory Stoneman Douglas High School in Parkland, Florida, on Aug. 15. (Photo: Joe Skipper/Reuters/Newscom)

It was six months ago but feels like just yesterday. On Feb. 14, a deranged teen attacked students and staff members at Parkland, Florida’s Marjory Stoneman Douglas High School, killing 17.

Like millions of parents and grandparents across America, I was transfixed by the news that day, watching the coverage with horror. I grieved for those whose lives were lost and those they left behind. And I feared for my own school-age grandkids.

On Wednesday, Stoneman Douglas opened its doors once again to a new school year. Again, like mothers and grandmothers nationwide, I want to know if anything has changed over the last half year.

The intervening months have certainly been eventful for some of Stoneman Douglas’ students. They marched in Washington, D.C., gave fiery speeches, and took a 20-state “Road to Change” bus tour to register voters and push for gun control. They rubbed shoulders with celebrities, gave hundreds of interviews, and made passionate appeals for gun control.

But as they settle back in at Parkland, will their school be any safer?

Fortunately, the answer appears to be “yes”—and it’s not because of any media-focused bus tour.

Instead, Broward County—like many other communities across America—has been working hard to improve school safety. Security upgrades at Stoneman Douglas include a new 12-foot security fence, improved classroom door locks, additional security guards, and continuous monitoring of the school’s video surveillance system. The school is even piloting the use of portable metal detectors.

None of these measures are as glamorous as a press conference with a movie star. But each will meaningfully improve school safety.

Of course, much more can and should be done. A good place to start is by taking action to prevent future tragedies by identifying and intervening with those who are likely to commit them.

I find it deeply disturbing that the Broward County school district reported no instances of bullying, harassment, battery, or trespassing at Stoneman Douglas for the entire 2016-17 school year. None.

That’s not just a problem—it’s a potential crisis. The Sun Sentinel reports that the school had many reportable incidents that year. But failure to report such incidents, as the paper observed, “mak[es] it impossible to spot a school’s trouble spots and inform parents about safety.”

Why is this so relevant?  Because the Parkland attacker was himself the victim of reportedly vicious bullying. He was also the subject of dozens of tips made to local police and the FBI. But no one acted on that information—and then it was too late.

The “Road to Change” bus tour could have focused the nation’s attention on these issues. It could have called for schools’ safety improvements and proactive intervention for people like the Parkland attacker. Sadly, though, it seems to have had a very different objective.

According to the tour’s website, its objective was “to get young people educated, registered, and motivated to vote.” It was, according to its own words, a political operation.

Political activism is fine, but to focus on politics instead of commonsense solutions for school safety simply isn’t.

Nor is focusing solely on guns. The Columbine attackers brought bombs to school. Last year, a Maryland girl was arrested for planning to blow up her classmates. And just weeks after the Parkland attack, an ISIS-inspired Utah teen brought a homemade bomb to school.

That’s why a holistic approach is needed. More secure schools. Better mental health services. A proactive response to bullying. And “red flag” laws to keep weapons away from those who pose a clear threat to themselves and others.

These are just a few of the commonsense solutions that can make schools safer. None of them have the flash and dazzle of a political bus tour. But that’s all the more reason for us to pursue them.

After all, our children deserve nothing less. It’s been six months since the Parkland tragedy—and they’re heading back to school NOW.