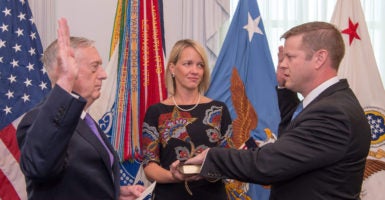 Defense Secretary James Mattis, left, administers the oath of office to Ryan D. McCarthy for the 33rd undersecretary of the Army as his wife Jennifer McCarthy looks on during a ceremony at the Pentagon Sept. 5, 2017. McCarthy’s vision is of Army civilians working “alongside entrepreneurs, scientists, and researchers,” demonstrating intent to establish a culture of innovation and break the mold. (Photo: Amber I. Smith/ZUMA Press/Newscom)

The Army issued an order in June establishing an Army Futures Command, and last month it selected Austin, Texas, as the location for its headquarters.

Establishment of the Army Futures Command is a potentially significant step for the military in its journey to becoming a world-class innovator.

Innovation in the military does occur, and often on a large scale. Except when prompted by conflict, however, the innovation usually occurs across longer timelines, with slower processes for the innovation itself, and typically slow or troublesome procurement.

The culprit in this process is the bureaucratic nature of the U.S. military and its inability to operate innovatively. That means that new platforms and equipment can be rendered obsolete by adversaries and battlefield challenges simply as a result of the time and spending it takes to deploy a new technology.

Even readiness for future threats can be stunted by the cancellation of innovative solutions, such as the Future Combat System, when the goals are overly ambitious. Both scenarios can result in billions of dollars wasted and leave the U.S. military at a significant disadvantage.

As with any government entity, the U.S. Army is inherently a bureaucracy that prioritizes hierarchy, order, and structure. It values the predictable status quo, the very antithesis of innovation—which has an inherently disruptive nature.

With Austin being established as its headquarters, the Army Futures Command will operate close to innovative activity in both academia and the private sector. It aligns with Undersecretary of the Army Ryan McCarthy’s vision of Army civilians working “alongside entrepreneurs, scientists, and researchers,” demonstrating its intent to establish a culture of innovation and break the mold.

Though the Army took previous steps to try and foster innovation—such as developing elements under the Training and Doctrine Command as the Army Capabilities Integration Center—the necessity for the command to focus on disparate missions such as training and capability development inhibited  innovation efforts.

These teams follow the model of what creates the critical component of an organizational matrix, a structure often seen in the innovation teams of private firms. There, members representing various areas of the business (e.g., engineering, marketing, finance, research and development, etc.) collaborate to build a product with inputs from each component within the team itself, rather than by circulation to each department.

This “circulation” methodology is that of a bureaucracy, and therefore what the Army has traditionally used.

By moving to a matrixed structure, the Army can develop better lines of communication and collaboration, which will help not only build innovative solutions more quickly, but prevent them from procurement and deployment delays by the bureaucracy.

Still, as Heritage Foundation expert Tom Spoehr describes in his latest report, the Cross Functional Teams must “understand that their first loyalty must be to the [Cross Functional Team’s] success, not their parent organizations.” That will retain focus and keep innovation as a top priority.

Funding must remain stable, if not increase. No organization, whether a private firm or military organization, can successfully innovate with restructuring and cuts associated with unstable budgets.

The 2019 National Defense Authorization Act is a critical step in securing this funding stability.

The new Army Futures Command is set to break the mold of traditional military innovation. Its current structure and even cultural change could provide momentum for it to become a successful, world-class innovator. Continuing this momentum is paramount to its success.

If all goes well, it could result in the U.S. Army becoming an innovative engine capable of dramatically outpacing adversaries and putting the U.S. back on top.