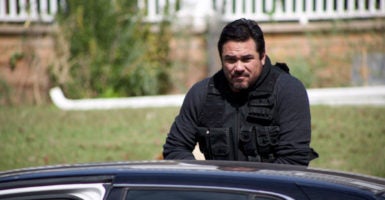 The dark and disturbing true story of an infamous Pennsylvania abortion doctor now serving a life sentence in prison is coming soon to a theater near you. It’s a film that has taken four years to give birth to.

Kermit Gosnell was sentenced in 2013 to life in prison for first-degree murder, involuntary manslaughter, illegal late-term abortions, and violation of the 24-hour informed-consent law. His case was long deemed “too controversial” by Hollywood and movie distributors alike, but husband-and-wife Irish journalists Phelim McAleer and Ann McElhinney are bringing Gosnell’s story to the big screen in their upcoming film “Gosnell: The Trial of America’s Biggest Serial Killer.”

After languishing since its completion in 2014, the film finally landed a distribution deal in May with GVN Releasing, an independent distributor that partners with Sony Pictures Home Entertainment to release films about urban life, faith, family, and women.

The film is set to premiere in more than 600 theaters across the country on Oct. 12.

“[I wanted] to tell the truth and tell a great story that needed to be told,” McAleer, a crime-documentary filmmaker, told The Daily Signal in a phone interview. “I hate cover-ups.”

By “cover-up,” McAleer was referring to the surprisingly sparse news media coverage of Gosnell’s arrest, trial, and conviction, despite its sensational nature—as even acknowledged by The Huffington Post and a liberal blogger for The Washington Post.

McAleer and McElhinney financed the film through a crowd-funding page, Indiegogo, on which they raised $2.3 million. The filmmakers chose Indiegogo because it has looser restrictions on what kinds of causes and campaigns its users can raise money for than other crowd-funding sites, such as Kickstarter.

The film is based on McAleer and McElhinney’s own New York Times best-selling book “Gosnell: The Untold Story of America’s Most Prolific Serial Killer.” Gosnell was an abortion doctor in Philadelphia known for extreme abortion practices at his clinic, which he called the Women’s Medical Society and the FBI dubbed “the House of Horrors.”

To medical professionals, Gosnell was known as the doctor who performed 18 highly publicized abortions at his clinic in 1972 using a method that involved aggravating the uterus into expelling the fetus. It was dubbed “the mass Mother’s Day abortion.” But to his patients and employees, he was known for snipping infants’ spinal cords after delivery and giving powerful, labor-inducing drugs in grossly unsanitary environments.

For 17 years, Gosnell carried out grisly abortions under the noses of both medical professionals and the Philadelphia government, which had halted abortion clinic checks in 1993 to loosen abortion barriers for women. It was not until the FBI and other law enforcement officials raided his clinic in 2010 to investigate Gosnell’s lucrative pill-pushing business that they found what he had been hiding in plain sight at his clinic just outside of the campus of Drexel University.

In May 2013, he was convicted of killing three live, newborn babies under the guise of abortion procedures for low-income women. He was also convicted of involuntary manslaughter in the death of one of his patients, Karnamaya Mongar, a refugee from Bhutan; 21 felony counts of illegal late-term abortion; and 211 counts of violating the 24-hour informed-consent law.

Now 77, Gosnell is currently serving a life sentence without the possibility of parole at the State Correctional Institution-Huntingdon in Pennsylvania.

“When I was asked to consider directing, I read [Andrew] Klavan’s script. I was stunned by all the information in it that I did not know about abortion. I wanted to share that information with as many people as possible, because I thought it would be beneficial to anyone, no matter their stance on the issue,” director Nick Searcy told The Daily Signal by email. “I felt strongly that I knew how to do it. In my business, it is rare when you come across a project that you consider to be actually important to the world. I felt called to try to do this story justice.”

The filmmakers decided to omit the gore that surrounded the case by creating the movie in a “‘Law & Order’-type court setting,” said McAleer, who expects a PG-13 rating for his film. Instead, it will only hint of Gosnell’s more graphic actions, for example, by having the actor portraying him picking up his signature scissors, but not showing him snipping a newborn’s spinal cord, as he often did.

“The movie dramatically and painstakingly tells what a legal abortion is and how it is performed, and compares it to the murderous procedures that Gosnell practiced,” said Searcy, who portrayed Chief Deputy U.S. Marshal Art Mullen from 2010 to 2015 on the FX cable channel’s crime drama series “Justified.”

“That is important information for any person who cares about this issue to have, no matter the stance,” he said.

The movie stars Earl Billings—best known for his role as Rob in the late ’70s ABC sitcom “What’s Happening!!”—as Gosnell. It will also feature Dean Cain, who portrayed Clark Kent and Superman in the ABC-TV series “Lois & Clark: The New Adventures of Superman” for four seasons in the mid-’90s, as Detective James Wood.

Although it was originally planned for release in 2017, the film met with numerous roadblocks, said McAleer.

“[Kickstarter] blocked us from raising money,” said McAleer. “Some people in Hollywood shied away, then distributors said it was “too controversial” because it casts a negative spotlight on abortion.”

The film also found its way into the middle of a lawsuit.

Jeffrey Minehart, a judge on the Philadelphia County Court of Common Pleas and the presiding judge at Gosnell’s trial, sued the filmmakers for $50,000 to keep them from distributing the movie because he thought he was defamed as part of “Philadelphia’s liberal corrupt government,” The Hollywood Reporter wrote. The lawsuit was settled and the filmmakers then were able to resume seeking distributors.

“I urge everyone not to be afraid to watch this film. It will inform your position on abortion, no matter what it is,” he said.