Trump Officials Warn of Russian Meddling in This Fall’s Elections 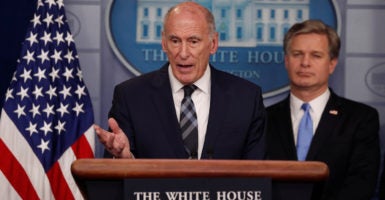 “Our democracy is in the crosshairs,” Homeland Security Secretary Kirstjen Nielsen said during the White House press briefing.

Nielsen said all 50 states are working with the Department of Homeland Security to help secure state and local election infrastructure such as voting machines and voter registration databases.

The recent indictment of 12 Russian intelligence officials cited hacks into state voter registration databases during 2016. The indictments were part of special counsel Robert Mueller’s investigation into Russian interference in the 2016 election campaign.

It’s not over yet, Director of National Intelligence Dan Coats told reporters at the briefing.

“We continue to see a pervasive messaging campaign by Russia to try to weaken and divide the United States,” Coats said.

FBI Director Christopher Wray told reporters that the FBI is focused on three pillars: investigating foreign influence, sharing information and intelligence with federal and state agencies, and working with private-sector companies on cybersecurity.

Wray said the Russian threat to the 2018 elections is “extremely serious.”

“The scope of this foreign influence threat is both broad and deep,” Wray said, adding: “The reality is, it’s going to take us working together to hold the field. This threat is not going away.”

However, the FBI director said, the meddling hasn’t yet reached the level of 2016.

“We are not yet seeing the same kind of efforts to specifically target election infrastructure,” Wray said.

National security adviser John Bolton talked about Trump administration efforts to combat Russia and other “malign foreign adversaries” who are attempting to interfere in the 2018 elections.

Questioned about the other countries, White House press secretary Sarah Huckabee Sanders said “there is evidence of other countries,” but said she “can’t get into specific details.”

Asked during the briefing whether the administration would consider a national voter ID law as part of a larger package to protect election integrity, Sanders said officials are “considering every option,” and that “it’s not unreasonable.”