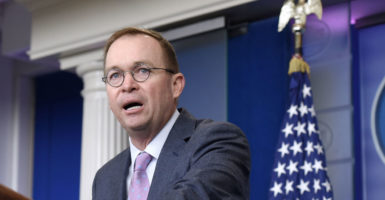 “The power wielded by the director of the bureau could all too easily be used to harm consumers, destroy businesses, or arbitrarily remake American financial markets,” Mick Mulvaney, the agency's acting director, says. (Photo: Abaca Press/Douliery Olivier/Abaca/Sipa USA/Newscom)

The Trump administration is urging Congress to reshape a consumer agency crafted by Sen. Elizabeth Warren, D-Mass., before it is used as a tool for “tyranny.”

The Consumer Financial Protection Bureau “is far too powerful, with precious little oversight of its activities,” the agency’s acting director, Mick Mulvaney, said Monday in a public statement. “The power wielded by the director of the bureau could all too easily be used to harm consumers, destroy businesses, or arbitrarily remake American financial markets.”

Mulvaney, a former Republican congressman from South Carolina who is also President Donald Trump’s director of the Office of Management and Budget,  released a semi-annual report to Congress.

The report details the CFPB’s work between last April and September, a period when Obama appointee and current Ohio gubernatorial candidate Richard Cordray led the agency. Trump put Mulvaney in charge of the agency in an acting capacity upon Cordray’s departure in November.

“The structure and powers of this agency are not something the Founders and Framers would recognize,” Mulvaney argued in his letter accompanying the report.

The CFPB appears tyrannical in accumulating “legislative, executive, and judiciary [powers] in the same hands,” Mulvaney suggested, quoting James Madison’s Federalist No. 47. Such an accumulation of power “may justly be pronounced the very definition of tyranny,” Madison wrote.

The CFPB director’s role, as the Dodd-Frank Act defined, simultaneously fills roles “as a one-man legislature empowered to write rules to bind parties in new ways; as an executive officer subject to limited control by the president; and as an appellate judge presiding over the bureau’s in-house, court-like adjudications,” Mulvaney said.

Conservatives have attacked the CFPB as unconstitutional since its inception. On top of the powers designated to the role of director—the only political appointee in the agency’s structure—the president cannot remove a director without significant cause.

If Congress doesn’t amend the structure, the Supreme Court eventually may hear a case about its constitutionality.

1. Fund the bureau through congressional appropriations.
2. Require legislative approval of major bureau rules.
3. Ensure the director answers to the president in the exercise of executive authority.
4. Create an independent inspector general for the bureau.

The CFPB under Mulvaney has dodged oversight from Congress, Warren claims—which the interim director appears to agree with. The bureau has no dedicated inspector general and has little accountability to Congress since its budget isn’t subject to the normal appropriations process.

“Since Mr. Mulvaney took control, he has ignored congressional mandates, turning the CFPB into the politicized rogue agency he accused it of being before,” Warren wrote in a March 28 op-ed in The Wall Street Journal.

Mulvaney addressed the concerns in his letter, saying he knows many members of Congress are displeased with his actions as director, just as other members didn’t like Cordray’s actions.

“Such continued frustration with the bureau’s lack of accountability to any representative branch of government should be a warning sign that a lapse in democratic structure and republican principles has occurred,” Mulvaney said. “This cycle will repeat ad infinitum unless Congress acts to make it accountable to the American people.”

Trump appointed Mulvaney, who continues to serve as the director of the White House’s budget office, to lead the CFPB temporarily after Cordray resigned in November. The president has yet to nominate a permanent director.