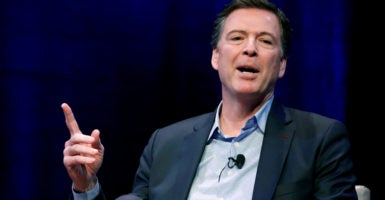 "The whole problem with the FBI and what they did with this FISA application is they also didn't verify or check any of the claims being made in the dossier. [Former FBI Director] James Comey said in his testimony sometime back that they were relying on Christopher Steele," says Hans von Spakovsky. (Photo: Jonathan Ernst/Reuters/Newscom)

Listen here to the full podcast, which features an interview with Hans von Spakovsky and a discussion of a new analysis of how 30-year-olds have changed since 1977, or read the lightly edited transcript of the interview below.

Daniel Davis: A significant development in the FBI 2016 election drama took place over the weekend. On Saturday, the Justice Department released redacted documents relating to the FBI’s surveillance of the Trump campaign. Here to unpack this and what it means is Hans von Spakovsky, a senior legal fellow here at The Heritage Foundation. Hans, thanks for being back.

Hans von Spakovsky: Sure. Happy to do it.

Davis: So, Hans, the president is claiming victory with these documents, saying they prove that he was spied on during the campaign. First question for you: What do these documents prove?

von Spakovsky: Well, having always been a big support of the FBI, I’m disappointed to say that I think the president is right.

They dumped over 400 pages of the documents related to the FISA warrant application. For your listeners, we should remind them the FISA court is the secret court that can approve electronic surveillance warrant, the ability to basically eavesdrop, particularly in espionage and terrorist case.

And even though a lot of the application was blacked out, it’s pretty clear that what, for example, [House intelligence committee] Chairman [Devin] Nunes … and others have said is correct, which is the FBI when it submitted its application asking for permission to surveil the campaign, in particular Carter Page, they were relying on unverified, uncorroborated information contained in the Christopher Steele dossier, which had been paid for by the Hillary Clinton campaign.

Katrina Trinko:  Let’s back track and talk a little bit more about that dossier. Of course the full dossier was published by BuzzFeed back in 2017. What do we know about it, and you mentioned it’s unverified—is there reason to believe that it’s untrue?

Trinko: OK. Expand on this, Hans.

von Spakovsky: Look, the dossier was composed of hearsay based on hearsay. It was composed by Christopher Steele, a former British agent, and he was basing it on anonymous sources who were hearing things from other anonymous Russian sources, and no work was actually done by him to verify whether any of the supposed claims were true.

And the whole problem with the FBI and what they did with this FISA application is they also didn’t verify or check any of the claims being made in the dossier. [Former FBI Director] James Comey said in his testimony sometime back that they were relying on Christopher Steele.

Well, I’m sorry, but that’s not the way a FISA application works. In fact, when the FBI signs the FISA application under oath, they are certifying that they have actually corroborated the facts and claims that are being submitted with it.

And they clearly didn’t do that.

So they didn’t verify it. They, in essence, were misleading the FISA court, and I have no doubt that the FISA judges would never had issued this electronic surveillance warrant if they had known that the FBI hadn’t actually checked any of this information.

Davis: Yeah. Or, I guess, if [the FISA court] had known that [the dossier] was funded by the DNC and …

von Spakovsky: Yes, exactly. That was also very important. Everyone needs to remember, look, the FISA court is intended, like I said, to go after terrorist activity, particularly in espionage cases.

And the law is very carefully written to say that it can’t be used to go after American citizens unless the FBI has evidence that that American citizen is the agent of a foreign power.

Well, again, reading through this FISA application—well, the only evidence they had that Carter Page was supposedly an agent of Russia was, again, information in the Steele dossier, which hadn’t been verified, and it’s really a serious thing for the government to approve secret surveillance of an American citizen, particularly also of a presidential campaign.

That’s never happened in American history, and that should not have happened unless the FBI had solid—and I mean solid—evidence that there had actually been a criminal violation of the law.

And you can read through this 400 pages of this application, there’s no such solid evidence anywhere in there.

Davis: So, if you can refresh us, our memory, just on the dossier itself. If you’re a FISA court judge and you have every reason to believe that this is legitimate, what kinds of things would that judge have been reading to get them to say, “Oh, yeah. FBI, you have a warrant to surveil the campaign.”

Again, they had no such evidence, despite what they said.

In fact, I think the FBI agents who actually signed this application form, they should all be in serious trouble for having submitted documents saying they had verified the information but hadn’t done so. In fact, it’s a violation of internal FBI policies to have done what they did.

Davis: Are these rank-and-file FBI agents or do you think they couldn’t been under the influence of someone like Peter Strzok, who clearly had some personal bias?

What makes this worse is that I think Rod Rosenstein, the No. 2 at the Justice Department, recently revealed in one of the renewals of this application, which he signed and certified. Well, he actually never read it. He had his staff read it. So that, to me, shows just how careless both officials at the Justice Department and how careless FBI agents were in the way this whole operation was conducted.

Trinko: So you mentioned that some of these individuals should face consequences, that they had violated the internal handbook. But you also brought up Rod Rosenstein. Is this raising questions that the FBI as a whole is compromised, and is in need of a clean out? Or how should we respond to these discoveries?

von Spakovsky: Well, look, I will be the first to tell you, and I know that our national security people at Heritage [Foundation] will tell you, that the FISA law and the FISA court is very important. It’s important that we have that to fight terrorism and espionage.

But I think all of the agents and officials at the Justice Department who abused the FISA law, abused the process in order to surveil what was, in essence, an opposition presidential campaign, have a lot to answer for.

We can’t stand for this kind of abuse, of this kind of a secret system because it’s just so dangerous to the fundamental way we’re organized as a country.

Davis: So the [special counsel Robert] Mueller probe continues to string along. What comes next after this release of documents?

von Spakovsky: Well, I don’t … we should mention the fact that while Mueller has publicized a lot of indictments, so far not a single indictment that he has released has anything to do with the original mission that he was given, which was to investigate where there was any collusion between the Trump campaign and the Russian government.

So far he hasn’t turned up a single piece of evidence. Yeah, he’s indicted Russian intelligence operatives for doing things like hacking into the DNC computer and using social media to try to sew chaos during the campaign. None of that should be a surprise. That kind of thing has been going on for a very long time.

We don’t have a probe going on in the Chinese government, and they are some of the biggest hackers in the world, particularly hacking into American government systems all the time. So I don’t know. Is he going to keep going even though he hasn’t found anything? I just don’t know the answer to that.

Davis: But at some point, he does have to bring forward his evidence, right?

von Spakovsky: He does, and so far there’s been no such evidence. The other problem with the indictment that he has released is that we’re never actually going to see the proof of whether they’re true or not. The dozen indictments that he just released of Russian intelligence agents working for the Russian military … the Russian government’s never going to extradite any of those individuals. So there’s never actually going to be a trial where Mueller has to actually present his evidence to show that they were involved in hacking of the DNC. So we will never actually know the truth of any of the allegations that Mueller is making in these indictments.

Trinko: So, big picture, does this throw into question even further the whole media narrative that there’s a likelihood between collusion between the Trump campaign and Russia?

von Spakovsky: Yes, it does, and it also, I think, throws even greater doubt into the issue of whether they had any basis to even open an investigation in the first place. And so far, I haven’t seen any evidence produced that showed that they actually had a basis to start an investigation.

Davis: Is there anything that could cause this investigation to close other than Mueller deciding to? Could he just decide to stay put, keep doing what he’s doing until …

Davis: Trump decides to pull the plug, at which point chaos would unleash.

von Spakovsky: Look, yeah. … good grief, the Ken Starr investigation went on for years and years and years. So there’s no telling how long Mueller may go on with this.

Trinko: OK. Well, thanks for joining us today, Hans.

von Spakovsky: Thank you for having me.