The Left Wants to Delay Brett Kavanaugh’s Confirmation. Here’s Why That Makes No Sense. 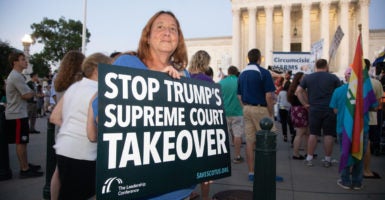 The Constitution grants the responsibility of nominating federal judges to the president. The process concludes with the “advice and consent” of the Senate.

Over 600 judges currently sit on U.S. district courts, nearly 200 at the appellate level, and nine who make up the Supreme Court. Both Republican and Democratic presidents have generally enjoyed wide latitude in their choices of nominations for the federal judiciary.

At one time, the advice and consent function of the Senate was largely perfunctory, concerning itself largely with ensuring the professional fitness and moral character of the nominees. Over the past few decades, however, the appointment process has become overly politicized. One would be remiss in not acknowledging that over the years, there have been some real political controversies regarding certain judicial appointments, namely that of imposing political litmus tests over various political questions, including civil rights and abortion rights.

But the politicization of the nominating process escalated to new heights of intensity when, in 2016, a Republican-controlled Senate refused to grant President Barack Obama’s Supreme Court nominee, Judge Merrick Garland, an up-or-down vote.

Senate leadership and rank-and-file Republicans argued that since Obama’s nomination of Garland occurred during the midst of a hotly contested presidential election, the American people would be denied an appropriate voice in the selection of a nominee by allowing the vote.

Democrats continue to blame Republicans for politicizing the Garland nominating process by raising the issue of the upcoming election and refusing to vote on the president’s constitutional prerogative, thus leaving the court without a deciding vote in the months leading up to and in the immediate aftermath of the presidential race.

Furthermore, they argue, the appointment of a conservative justice to replace the vacancy left by the sudden death of Justice Antonin Scalia—a beloved conservative—became a rallying cry for support of the Trump candidacy.

Now the roles have reversed. Senate Democrats have promised to use all parliamentary means at their disposal to obstruct the vote on President Donald Trump’s newest nominee, Judge Brett Kavanaugh, until after the mid-term elections this October. They argue that their action gives the American people a “voice” in selecting the new nominee in that a Democratic takeover of the Senate would force the president to nominate a less conservative justice.

They point out that retiring Justice Anthony Kennedy, a conservative justice nominated by former President Ronald Reagan, served as an occasional swing vote for the left. Democrats have not hesitated to highlight seeming hypocrisy on the part of Republicans, who have cried foul at their intended maneuver.

First, we are not in the midst of a presidential election, and regardless of whatever happens during the midterms, the nominee most likely will be a conservative. Waiting until after the midterms will not change that.

Secondly, the likelihood that Democrats regain control of the Senate during the midterms is low. Democrats would need to hold on to all of the Senate seats they currently hold, including those in states Trump won during the election, as well as pick up two additional seats. That is a narrow path to a Democratic majority at best.

Despite both facts, as soon as Kennedy announced his decision to retire from the court, Democrats began a major fundraising effort centered around the idea that Republicans want to roll back the clock on social progress on key litmus test issues: voting rights and abortion. They have utilized scare tactics to erode the public’s trust in the president’s ability to nominate a justice who will follow through law and uphold the Constitution, which is a standard that has existed for over 100 years.

The fact is, however, as widely acknowledged by legal analysts on both the left and right, Trump played it safe and smart with the nomination of a mainstream conservative like Kavanaugh. National Review columnist John Fund tweeted that “Kavanaugh was a real inhabitant of Bush World, even married George W’s personal secretary from Abilene. For Trump to overcome his background and pick him means Kavanaugh aced the interview with Trump and that Trump was willing to listen to establishment advice.”

Kavanaugh was a real inhabitant of Bush World, even married George W's personal secretary from Abilene. For Trump to overcome his background and pick him means Kavanaugh aced the interview with Trump and that Trump was willing to listen to establishment advice.

The nomination of a solid, mainstream conservative demonstrates growth and maturity on Trump’s part. He chose not only a safe pick, but also to listen to the advice of conservatives in the Senate and outside groups such as The Heritage Foundation and the Federalist Society to select a judge who maintains Republican support without any detractors, thus making him easy to confirm.

Democrats have already decided to politicize the process as much as they can. Although they may not ultimately be able to derail the president’s nominee, they could muddy the waters enough that radical elements within the GOP and the Trump camp could have time to regroup and disrupt the carefully calibrated unity between the president and mainstream conservatives. This could potentially poison the well for upcoming legislative battles and dilute the president’s strength among voters.

In order to avoid a possible impasse, Republicans would do well to negotiate a deal with Democrats that would ensure future Democratic nominees would also face less politicization. This could occur in the form of changing some of the Senate parliamentary rules to reduce politicization for all nominees, or in return for moving forward on stalled legislation around immigration or health care with Democratic input.

These are deals Senate leadership would be wise to consider.