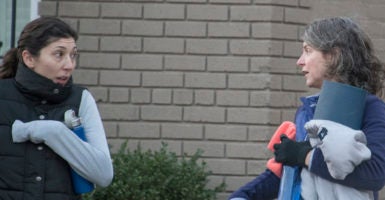 Two congressional committees have subpoenaed a former FBI attorney who exchanged anti-Trump text messages to appear for a closed-door deposition on Wednesday.

Strzok, who oversaw the FBI’s Russia investigation when it first started, will testify in public before both committees on Thursday.

Page’s lawyer told CNN that Page has negotiated with the GOP-controlled committees to appear voluntarily.

“We asked the committee staff to explain the scope of the investigation and provide sufficient notice that would allow her to prepare, which are normal conditions for congressional committees, but these committees have not followed the normal process,” Amy Jeffress told CNN.

Jeffress said that the FBI has agreed to provide Page with notes and other documentation to help her prepare for her deposition but that the bureau has yet to provide the documents.

“We are still waiting to work out a reasonable date for her interview,” said Jeffress, adding that “Lisa has cooperated voluntarily with another congressional committee that had no objection to explaining the scope of its investigation or providing sufficient notice for her interview.”

Page resigned from the FBI on May 4. She previously served as general counsel to Andrew McCabe, the former deputy director of the FBI. Page was the FBI official who McCabe instructed to speak with a Wall Street Journal reporter for an October 2016 article about the FBI’s Hillary Clinton investigation.

McCabe was fired from the FBI after the Justice Department’s office of the inspector general determined that he gave misleading statements about his role in authorizing Page’s contact with the press.

Page also worked alongside Strzok on the Russia investigation. She was detailed to the special counsel’s investigation shortly after Robert Mueller’s appointment on May 17, 2017. Page left the Mueller team after the end of a temporary assignment while Strzok was kicked off of the investigation after the discovery of his politically-charged text messages.

The texts showed Strzok and Page criticizing Trump and his supporters while discussing strategy related to the Russia investigation.

In one Aug. 8, 2016 text message, Page asked Strzok if Trump would be elected president. Strzok replied in the negative saying that “we’ll stop it.”