Fact Check: Are 80% of Asylum Court Cases Not Approved? 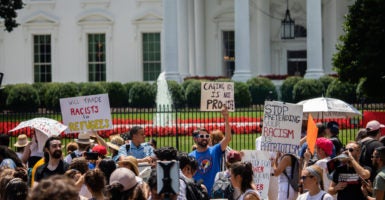 Protesters gather in front of the White House to protest the Trump administration’s border policy on June 30. (Photo: B.T. Marsh for The Heritage Foundation)

Homeland Security Secretary Kirstjen Nielsen said in a Fox News interview that about 80 percent of people seeking asylum in immigration court do not receive it.

About 80 percent of asylum cases in immigration court are denied or otherwise closed. That figure does not include thousands of people granted asylum outside of court.

Nielsen mentioned the large portion of asylum-seekers who are not granted asylum after the Trump administration announced a “zero tolerance” policy toward illegal immigration on the southern border.

“About 80 percent pass that initial interview, but only 20 percent are granted asylum by a judge, which tells us that 80 percent of that is either just a flat-out fraud or somebody who thinks they can come here because they want a job here,” she said in a Fox News interview in May.

Rep. Jim Jordan, a Republican from Ohio, also mentioned the figure on “Face the Nation” Sunday. “When [Immigration and Customs Enforcement] was in our office just a week-and-a-half ago, they told me 80 percent of the folks seeking asylum wind up not getting it, they are not actually eligible for it,” he said. “So they’re telling me the number; 80 percent aren’t actually legitimate asylum seekers. We need to sort that out.”

Immigration courts did not explicitly deny asylum in all of the other 80 percent to 83 percent of cases. They denied 34 percent in FY 2017 and 23 percent in FY 2016, but closed the rest of the cases because, among other reasons, the asylum-seeker never showed up or the applicant withdrew the claim. Some of the individuals in the closed cases could have gotten other forms of humanitarian relief or deportation deferrals.

EIOR calculates an asylum “grant rate” by comparing only explicit grants and denials, excluding cases closed for other reasons. By that calculation, with 8,726 grants and 11,643 denials, EOIR’s asylum grant rate was 43 percent in FY 2016 (or a denial rate of 57 percent).

The asylum denial rate is closer to the 80 percent figure when looking at decisions for people seeking asylum from Central America and Mexico rather than all countries. A significant portion of asylum-seekers and recipients are from China, for instance, and not as relevant to the debate about the Trump administration’s “zero tolerance” policy on the southern border.

Statistics on EOIR asylum cases, however, do not include thousands of people who received asylum without appearing in immigration court.

There are two types of asylum applications: affirmative and defensive.

People who seek affirmative asylum either apply at a port of entry or within a year of arrival to the country. Applicants schedule an interview with an asylum officer from U.S. Citizenship and Immigration Services (USCIS). If USCIS approves the asylum application, the case is not counted in EOIR’s statistics on asylum cases because it was not heard in immigration court.

Immigration courts handle defensive asylum cases. Defensive asylum involves people who were apprehended after crossing the border illegally, are being processed for removal from the country or were referred by USCIS for further review. Those seeking defensive asylum endure a more adversarial, court-like hearing.

USCIS approved 47 percent of interviewed affirmative asylum applications in FY 2015. It denied 1 percent of the applications and it referred another 52 percent to EOIR for further review. EIOR has historically approved around three-fourths of cases referred from USCIS.

The government does not publish an overall asylum grant rate that includes both affirmative asylum and defensive asylum. Alex Nowrasteh, a senior immigration policy analyst at the libertarian Cato Institute, told TheDCNF that there is no data tracking individual asylum-seekers over time as they move through the system and across agencies.

The Trump administration has called for reform to asylum laws. Attorney General Jeff Sessions said in a ruling that victims of domestic violence or gang violence should generally not be eligible for asylum under the “member of a particular social group” category. Vox reported Friday that the administration is drafting a plan to prevent people who enter the country illegally from getting asylum.