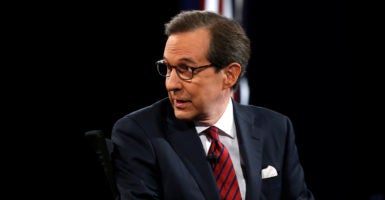 Chris Wallace, who is pictured speaking to an audience in Las Vegas, Nevada, in 2016, called out the media regarding their comments about President Donald Trump and the Annapolis shooting. (Photo: Jonathan Ernst/Reuters/Newscom)

Wallace played a clip of reporters yelling at Trump on the South Lawn of the White House as they tried to establish a link between the deadly massacre and his treatment of the media.

“I have been very outspoken about President Trump calling the media the enemy of the American people, I think it’s wrong,” Wallace said.

“But I have to say that that spectacle that we saw on the South Lawn—and some reporters in any way trying to draw a link between his comments about the media to the shooting in Annapolis of five reporters in a newspaper office, a shooter apparently with a long grudge against that paper, I think is outrageous. Am I wrong?” he asked.

“We’re in a new environment,” Jason Riley of The Wall Street Journal replied. “On the left particularly, blame Trump, ask questions later. That’s the new mode that the press operates in.”

Content created by The Daily Caller News Foundation is available without charge to any eligible news publisher that can provide a large audience. For licensing opportunities for this original content, email [email protected]dation.org.