Goodlatte: FBI Lawyers Instructed Strzok Not to Answer ‘Many, Many’ Questions in Deposition 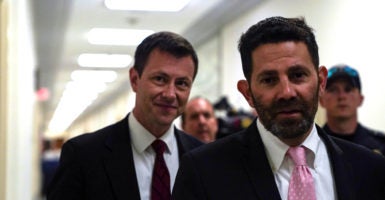 FBI agent Peter Strzok, left, walks into a classified meeting after being interviewed by the House Judiciary Committee at the Rayburn House Office Building in Washington, D.C., on June 27. (Photo: Toya Sarno Jordan/Reuters/Newscom)

FBI lawyers instructed Peter Strzok during a congressional deposition on Wednesday not to answer “many, many questions” about his involvement in the Hillary Clinton and Russia investigations, said House Judiciary Committee Chairman Bob Goodlatte.

Strzok, the former deputy chief of counterintelligence at the FBI, testified for more than 10 hours about his roles in the Clinton and Trump-Russia investigations. He was also pressed about anti-Trump text messages he exchanged with his mistress, a former FBI lawyer named Lisa Page.

Strzok, who was accompanied by his personal attorney on Wednesday, was the top investigator on Crossfire Hurricane, the FBI investigation into possible collusion between President Donald Trump’s campaign and the Russian government. He served on the special counsel’s investigation until July 2017, when his text messages were discovered by the Justice Department’s Office of the Inspector General.

Attorney General Jeff Sessions said on June 21 that Strzok was stripped of his security clearance amid an internal disciplinary investigation.

Goodlatte said he was unable to divulge details of the interview with Strzok. But he said that the questions about the collusion investigation touched on the process by which the probe came about.

“They are advising him not to answer those questions,” Goodlatte said of the FBI attorneys. “I think that’s inappropriate and certainly not helpful to our investigation in the Congress.”

Strzok was initially subpoenaed to appear for the testimony, which was conducted by the Judiciary and House Oversight and Government Reform committees. He met with lawmakers in a classified setting later on Wednesday afternoon. Goodlatte has indicated that he plans to invite Strzok to testify in a public session.

Republicans have zeroed in on Strzok’s texts messages with Page.

In one Aug. 8, 2016, message, Strzok told Page that “we’ll stop” Trump from becoming president. In another text, Strzok called Trump an “idiot.”

Democratic lawmakers who attended Wednesday’s deposition told various reporters that Strzok claimed that his political leanings did not influence his investigation of Clinton or Trump. Democratic Rep. Sheila Jackson Lee of Texas said Strzok downplayed his text messages, saying that they were “intimate conversations between intimate friends.”