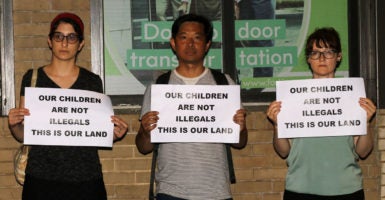 Hundreds of New Yorkers assembled on June 21 in New York City at a newly discovered detention facility named Cayuga Children's Center in Harlem for a silent vigil as an expression of demand that the children be reunited with their families. (Photo: G. Ronald Lopez/ZUMA Press/Newscom)

Seventeen states and Washington, D.C., are suing the Trump administration over the separation of illegal immigrant families at the border.

New York, California, and fifteen other states led by Democratic attorneys general filed a lawsuit in the U.S. District Court in Seattle Tuesday, marking the first legal action taken by states in response to the Trump administration’s “zero tolerance” immigration policies and the resulting separation of families, the Associated Press reported.

The situation at the border has been described by critics of the current administration as a humanitarian disaster. Having issued a clear warning, the administration is attempting to prosecute all illegal immigrants crossing into the U.S., although resources are stretched thin.

The administration’s decision to fully enforce U.S. immigration law has led to the separation of family units caught crossing into the U.S. in a manner in violation of U.S. law. More than 2,000 illegal immigrant children were separated from their parents prior to a recent executive order from the president that would detain illegal immigrant families together rather than separate them.

Customs and Border Protection has reunited over 500 children with their parents since the “zero tolerance” policies went into effect. Nonetheless, the outrage persists. Thousands of activists and demonstrators protested in cities across the country in defense of illegal immigrants, calling for an end to the separation of families at the border.

The lawsuit is also critical of the perceived lack of due process for illegal immigrants.