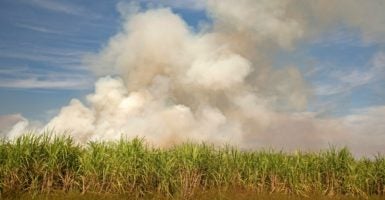 Why would any conservative support the current Senate farm bill?

It’s a failure when it comes to food stamps and farm subsidies.

This may come as a surprise to some, but the farm bill should really be called the food stamp bill. Food stamps account for about 70 percent of farm bill costs.

The Senate farm bill doesn’t do anything to reform food stamps. It doesn’t reduce dependency on welfare assistance nor does it strengthen work requirements.

As my Heritage Foundation colleagues wrote, “work requirements in welfare promote greater self-support and establish a reciprocal obligation between the beneficiary and the taxpayers who fund the benefits.”

By not addressing work requirements, the Senate is doing a disservice to taxpayers and to millions of people who receive food stamp benefits.

The Senate is also ignoring sound policy that the public strongly supports.

Nearly 90 percent of Americans agree that “able-bodied adults who receive cash, food, housing, and medical assistance should be required to work or prepare for work as a condition of receiving those government benefits.”

Then there’s the Senate farm bill’s failure when it comes to farm subsidies. Like with food stamps, the Senate farm bill doesn’t reduce dependence on the federal government. Even though most farmers receive little to no assistance from the federal government, a small subset of farmers depend on government handouts. In general, they don’t receive assistance to protect their crops from disasters, but instead to help their business operations meet revenue targets.

In other words, they have no need for such taxpayer assistance.

Further, most of these agricultural businesses have far greater household income and wealth than non-farm households. In fact, about one-third of commodity payments go to farms whose median net worth is $3.8 million, an amount that’s an astonishing 39 times greater than the median net worth of all U.S. households.

The Senate farm bill does nothing to address billions of dollars going to big producers who are not in need of any assistance.

Nor does the bill eliminate or even reform the federal sugar program that intentionally drives up food prices. This hidden tax of about $3.7 billion a year on families hurts the poor the most.

The Senate farm bill also ignores all of the farm subsidy reforms promoted by the Trump administration in its budgets. Even widely supported reforms like reducing the generous premium subsidies for crop insurance have been ignored.

So to answer the original question, there’s no good reason for conservatives to support the Senate farm bill. In fact, it’s hard to understand why conservative legislators would not adamantly oppose such legislation.

Conservatives believe in reducing dependence on the federal government, not maintaining or increasing it. They believe in placing faith in markets, not central planning. They believe in equal opportunity, not special favoritism to help connected special interests.

In its current form, the Senate farm bill is many things, but conservative is not one of them.