17% of Judicial Positions Are Now Vacant 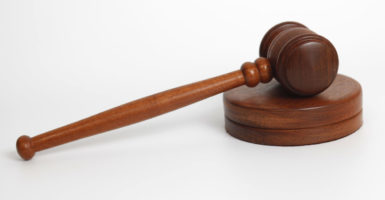 As Sen. Bob Dole once said, the judges a president appoints may be his most profound legacy.

Federal judges have become increasingly powerful, much more so than America’s Founders intended. For our system of government to work as designed and to produce the liberty it promises, presidents must appoint the right kind of judges.

President Donald Trump’s determination to do that is confirmed by the dogged opposition to his judicial nominees by Senate Democrats and their left-wing grassroots allies. The problem they are causing is significant.

Today, 142 seats on life-tenured federal courts—almost one-sixth of all such positions—sit vacant. That’s almost 17 percent of the entire judiciary.

The judiciary’s administrative office also identifies a category of vacancies called “judicial emergencies”—meaning they have been open so long and put such pressure on caseloads of other judges as to constitute an emergency that they be filled.

Senate Democrats once said 68 overall vacancies, with 35 judicial emergency vacancies, constituted a “crisis,” but that was when a Democrat was president.

But the problem gets worse. We know of another 32 vacancies that will occur soon, which would leave us short more than 20 percent of the judiciary.

Since the Constitution creates a role for both the president and the Senate in the process of appointing judges, it’s important to know how much progress they are making. Trump has nominated 134 men and women to the bench in the last 18 months, significantly more than any of his predecessors of either party.

Sen. Charles Grassley, R-Iowa, chairman of the Judiciary Committee, has held hearings on 97 of those. Under the previous six presidents—three Democrats and three Republicans—an average of 62 nominees had received a hearing at this point. Grassley is more than 50 percent ahead of that pace.

Although the Judiciary Committee majority controls the pace of hearings, things still can bog down on the Senate floor. The minority party no longer can use the filibuster to prevent final confirmation votes altogether, but it can delay those final votes as long as possible.

One tactic is to force the Senate to take multiple votes on each nomination. It takes the same number of votes to end debate as it does to confirm a nomination now, so the only reason for multiple votes is to drag out the process. Senate Democrats have forced the Senate to take these unnecessary votes to end debate on 40 of Trump’s judicial nominations. That compares to two votes, at this point, for the previous 12 new presidents combined.

It’s not that these votes to end debate mean Democrats really want to debate. More than one-third of the time, no more than five senators vote to have any debate at all. Their indiscriminate demand for these unnecessary votes has dragged in nominees who were initially chosen by President Barack Obama, and even those who have no opposition at all. In fact, more than half of these votes have been on nominees who later received at least 75 votes for confirmation.

The result of this campaign is that the Senate has so far confirmed 42 of Trump’s judicial nominees. As a percentage of the judiciary, this is more than 30 percent behind the average pace of all presidents from Jimmy Carter to Obama.

The president is nominating judges at a robust rate, and the Republicans who run the Judiciary Committee are moving those nominees along. But Democrats’ obstruction tactics are holding confirmations back. Judicial vacancies are more than 30 percent higher than when Trump took office. The judges who are faithfully serving, and the Americans who look to the courts to handle civil and criminal cases, deserve better.