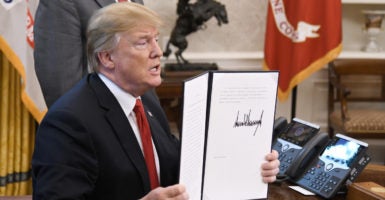 President Donald Trump on Wednesday holds a signed executive order to keep families together at border in the Oval Office of the White House. (Photo: Olivier Douliery/Abaca Press/Newscom)

President Donald Trump signed an executive order Wednesday to halt separating families that illegally cross the border, but also said he wants to sign a “comprehensive” immigration bill from Congress.

“You may be able to do for immigration what Nixon did for China and Reagan did for the Soviet Union,” @SenAlexander says.

In signing the executive order, Trump said, “We are going to have a lot of happy people.”

“Zero tolerance” marked a tougher approach by the Trump administration in enforcing existing immigration law by arresting those who enter the country illegally.

The order is a temporary fix, and is titled “Affording Congress an Opportunity to Address Family Separation.”

The Secretary of Homeland Security (Secretary), shall, to the extent permitted by law and subject to the availability of appropriations, maintain custody of alien families during the pendency of any criminal improper entry or immigration proceedings involving their members. … The Secretary shall not, however, detain an alien family together when there is a concern that detention of an alien child with the child’s alien parent would pose a risk to the child’s welfare.

“This is a situation that president after president hasn’t dealt with for decades,” Nielsen said. “This one is willing to stand up and fix it. We ask Congress to do their part.”

Pence called it a “false choice between being a country of law and order and a country that demonstrates compassion and heart of the American people.”

Trump said that Congress must act, not only to address the minors situation but also for a “comprehensive” bill to address immigration.

Trump met with 11 Republican senators and five GOP House members earlier Wednesday in the Cabinet Room of the White House where he first announced he would be signing the order, and also called for a broader measure.

“You’re the president who can help us solve the immigration problem with your leadership,” Alexander said. “You may be able to do for immigration what Nixon did for China and Reagan did for the Soviet Union and a lot of us would like to work with you on that.”

At least two bills have some GOP support in the House.

House Speaker Paul Ryan, R-Wis., has a “compromise bill” that gives DACA beneficiaries a pathway to citizenship and includes $25 billion for a border wall.

Rep. Paul Gosar, R-Ariz., told Roll Call of the two bills, “We don’t like any of them,” and said that “Immigration is kind of my sacrosanct. You’ve got to do this the right way. You just can’t do this badly.”

The detention of children has been a raging controversy as the administration increased enforcement.

According to immigration experts, under the federal government’s Flores settlement of 1997, the federal government would release unaccompanied minor illegal immigrants after no more than 20 days of detention. A separate 2008 law required unaccompanied minors be transferred out of custody of the Department of Homeland Security to the custody of the Department of Health and Human Services.

Then, a 2016 judicial interpretation expanded the Flores settlement to include minors brought into the country with their parents. So, conforming to the expanded interpretation of the settlement and the existing law, the DHS enforcement agencies, after arresting illegal immigrant parents, have transferred minor children to the custody of the HHS Office of Refugee Resettlement, which tries to place them with relatives or a caretaker.

During the meeting with members of Congress, Pence told lawmakers the administration was limited.

“We don’t want children to be taken away from parents, but, right now under the law, and we sit with these lawmakers, we only have two choices before us,” Pence said. “No. 1 is don’t prosecute people who come into our country illegally, or prosecute them and then under court cases and the law, they have to be separated from their children.”

The Attorney General shall promptly file a request with the U.S. District Court for the Central District of California to modify the Settlement Agreement in Flores v. Sessions, CV 85-4544 (“Flores settlement”), in a manner that would permit the Secretary, under present resource constraints, to detain alien families together throughout the pendency of criminal proceedings for improper entry or any removal or other immigration proceedings.

The order is not a policy departure for the president, said Hans von Spakovsky, senior legal fellow for The Heritage Foundation.

So to the extent the 1997 Flores settlement and the 9th Circuit’s misinterpretation of it prevents DHS from holding juveniles for more than 20 days, this language gives DHS the exception they need to still separate families if they have to in order to comply with Flores.

As I expected, the [executive order] also tells the AG in Sec. 3 (e) to file a request with the court in the Flores case to allow DHS to detain families together “throughout the pendency of criminal proceedings for improper entry or any removal or other immigration proceedings.”

So the president is not backing down from prosecuting all illegal aliens who cross the border, which is what the critics wanted.

Pence reiterated the president’s call for a comprehensive measure when talking to lawmakers.

“The president’s vision, as articulated in his State of the Union address, was let’s solve the whole problem,” Pence said. “Let’s build a wall, let’s close the loopholes, let’s solve the problem for 1.8 million people that were brought into this country through no fault of their own, and let’s deal with law and order and compassion with this issue of family separation at our border.”