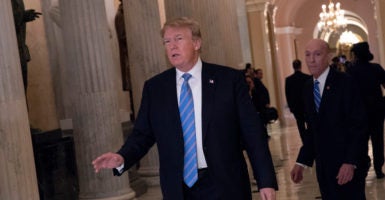 House Republicans appeared to move toward the weaker of two immigration bills after meeting Tuesday evening with President Donald Trump ahead of votes expected later this week.

Rep. Bob Goodlatte, R-Va., sponsor of the stronger, more conservative bill, announced following the meeting that he instead could support the “consensus” legislation pushed by House Speaker Paul Ryan.

Beginning at 5:30 p.m., the president spoke with the GOP lawmakers for about an hour amid intense media coverage of the Trump administration’s “zero tolerance” enforcement at the southern border, which sometimes includes separating children from parents.

“The president wasn’t very clear about what he supports,” one House Republican aide told The Daily Signal, including which bill or what provisions. “There has just been a lot of confusion.”

In a tweet after the meeting, Goodlatte said he had formally introduced the Ryan-backed bill.

Trump previously had indicated that he could sign either bill.

“I think the big takeaway is that it was a far cry short from what members were expecting,” the House aide said. “At least as of yesterday he was at a yes-yes strategy, ‘I want both to pass.'”

Trump departed from the subject of immigration reform to talk about other matters, including North Korea.

“Most of the [meeting] was him talking about trade and tax reform,” the aide said, “and he wasn’t really talking about immigration. I was told he only did a few minutes on that.”

In a phone interview with The Daily Signal immediately afterward, Rep. Dave Brat, R-Va., blamed Democrats for obstructing immigration reforms and said he continues to support the stronger of the two Republican bills.

House Republicans feel pressed to do something about the so-called “Dreamers,” those brought to the United States illegally as minors and protected from deportation if accepted under President Barack Obama’s Deferred Action for Childhood Arrivals, or DACA, program.

Trump wants to end the DACA program, which allows eligible illegal immigrants to live and work in the U.S. without fear of deportation, and replace it with one authorized by Congress.

>>> Related: Fact-Checking 4 Claims About Detaining Children at the Border

The bill originally crafted by Goodlatte, chairman of the Judiciary Committee, would require employers to use E-Verify, now a voluntary system, to check the immigration status of employees. It also would give renewable legal status to the 700,000 DACA recipients for three years, authorize a wall at the U.S.-Mexico border, increase border security in other ways, and end both the visa lottery program and the practice known as chain migration.

One senior aide to conservative lawmakers put it this way:

There’s a reason that the Goodlatte bill has received more vocal support from the grassroots and a lot of conservative members in Congress, and that’s because it’s in closer alignment with what members were elected to do: Secure the border, enforce our immigration laws, build a wall, while also addressing the DACA situation and what to do for children at the southern border.

The other legislation, the “compromise bill” advanced by Ryan, R-Wis., would give DACA beneficiaries a path to citizenship while including $25 billion for Trump’s promised border wall.

Trump’s first tweet after the meeting was about illegal immigration, but though he called for both “‘heart’ and security in America,” he didn’t shed light on his preferred legislation.

Homeland Security @SecNielsen did a fabulous job yesterday at the press conference explaining security at the border and for our country, while at the same time recommending changes to obsolete & nasty laws, which force family separation. We want “heart” and security in America!

The four lawmakers described it as “a consensus bill that is the product of negotiations between Republicans of all perspectives and addresses the four pillars for immigration reform” outlined months ago by Trump.

Goodlatte appeared to be saying he would rather see the Ryan-backed bill pass the House than nothing.

But Brat, his colleague from Virginia, told The Daily Signal that he continued to back Goodlatte’s original bill.

“The Democrats wanted a [government] shutdown in January, and went to the Senate for a shutdown over [inaction on] 700,000 DACA kids, and that made it into the Goodlatte bill,” Brat said, adding:

“From my point of view,” Brat said, “I hope we go with the stronger Goodlatte bill.”

Both the Ryan and Goodlatte bills, as well as legislation introduced Monday by Sen. Ted Cruz, R-Texas, and Rep. Mark Meadows, R-N.C., also would allow parents who crossed the border illegally to stay with their children at detention centers.

That arrangement is currently prohibited, requiring federal officials to take children from their detained parents in some cases and temporarily place them elsewhere.

In an interview earlier Tuesday with CNN’s Alisyn Camerota on “New Day,” Goodlatte said he supports ensuring that families who cross the border illegally are able to remain together.

“We need to do everything we can to make sure that we have the ability when parents show up [at the border] with their children to let the children stay with the parents,” Goodlatte said.

House Democrats, led by Rep. Jerrold Nadler, D-N.Y., the ranking member of the Judiciary Committee, introduced their own legislation Tuesday to stop separation of children from parents at the border.

Today, I introduced the #KeepFamiliesTogetherAct along with over 190 of my @HouseDemocrats colleagues so that we can end the horrific family separation happening at the border as a result of the Admin's 'zero tolerance' policy. #KeepFamilesTogether https://t.co/VroomF9mQZ 1/2 pic.twitter.com/WccgN4DxYh

David Inserra, a homeland security policy analyst for The Heritage Foundation, told The Daily Signal in an email that the two GOP bills don’t do enough to fix the immigration system.

“The Goodlatte bill was a good faith effort to try to solve many of the immigration problems in our country, including chain migration, imperfect border security, sanctuary cities, and immigration loopholes that inhibit immigration officials’ ability to effectively enforce the law,” Inserra said, adding:

It fell short, however, because of several flaws, including unjustifiably high authorization of money and wasteful spending for border security, failing to truly convert the U.S. immigration system into a merit-based one, lacking resources to improve interior enforcement and immigration courts, and advancing a harmful and unfair amnesty.

The so-called compromise bill is a watered-down version of the Goodlatte bill, Inserra said.

“The new Ryan amnesty compromise weakens the Goodlatte bill by removing most anti-sanctuary city provisions, failing to fully end chain migration, and still failing to create a merit-based system, and expanding amnesty beyond just those in the DACA program while adding a complex path to citizenship,” Inserra said. “As such, it will further contribute to the brokenness of the immigration system.”

An analysis by the Center for Immigration Studies, which advocates tougher enforcement of immigration law, also said the compromise bill promotes amnesty for illegal immigrants.

Conservative groups, among them Heritage Action for America, the lobbying arm of The Heritage Foundation, argue that both bills would provide amnesty to illegal immigrants.

“Heritage Action opposes amnesty,” Tim Chapman, the organization’s executive director, said in a prepared statement. “While lawmakers fighting to build a national consensus for an immigration policy that works for hundreds of millions of Americans deserve credit, those changes cannot be predicated on codification of amnesty. Doing so is fundamentally unfair to immigrants who come to our nation legally and uphold our rule of law.”

Tommy Binion, director of policy outreach at The Heritage Foundation, told The Daily Signal in an interview that Congress should consider border security separately from other immigration issues.

“Both immigration bills that the House is considering are seriously flawed,” Binion said, adding:

I think it is a mistake to combine border security with other immigration efforts. As a policy matter, amnesty actually puts more pressure on the border, which makes it harder to secure the border. So when Washington attempts to package the two things together, it actually ends up with a bill that is pulling in two different directions.