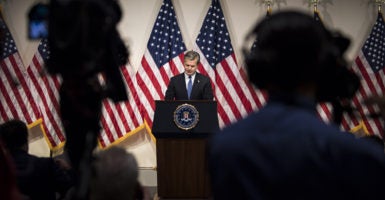 Christopher Wray, director of the Federal Bureau of Investigation, speaks at a press conference on the inspector general's report on the Justice Department's and FBI's activities in the run-up to the 2016 presidential election. (Photo: Kevin Dietsch/Upi /Newscom)

The Department of Justice inspector general identified a number of instances where FBI employees regularly spoke with members of the media and received a number of free perks from journalists, including meals and tickets to various events.

On page XII in the report, the inspector general says the department “identified numerous FBI employees, at all levels of the organization and with no official reason to be in contact with the media, who were nevertheless in frequent contact with reporters.”

The IG expressed “profound concerns about the volume and extent of unauthorized media contacts by FBI personnel that we have uncovered our review.”

The contact between FBI agents and the media extended to “improperly receiving benefits from reporters, including tickets to sporting events, golfing outings, drinks and meals, and admittance to nonpublic social events.”

In the following paragraph, the IG implies that such benefits could have encouraged various agents to leak information to the press.

“The harm caused by leaks, fear of potential leaks, and a culture of unauthorized media contacts is illustrated in chapters ten and eleven of our report, where we detail the fact that these issues influenced FBI officials who were advising [James] Comey on consequential investigative decisions in October 2016,” the report states.

The IG is unambiguous in its opinion that the problem with leaking is not “with the FBI’s policy, which we found to be clear and unambiguous.” Instead, the leaking phenomenon “appears to be a cultural attitude among many in the organization.”

According to charts provided in the IG report, one reporter had contact with 12 FBI officials, including an FBI executive and unit chief.

Another reporter contacted an assistant director 21 times and a special agent 23 times, according to the IG. Some FBI employees were in contact with multiple reporters, with one special agent contacting various journalists 32 times.

Such a finding by the IG helps shed light on how various information has reached outlets like CNN or The New York Times throughout the criminal investigation into former Secretary of State Hillary Clinton. One of the striking findings from the report is how senior officials within the organization had no problem speaking with the media and breaking department policy—and possibly receiving goods in exchange for that information.