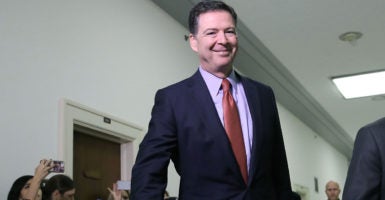 James Comey “set a dangerous example for the over 35,000 current FBI employees ... who similarly have access to or knowledge of non-public information," the report states. (Photo: Mark Wilson/Getty Images)

The Justice Department’s Office of the Inspector General on Thursday released its long-awaited “Report of Investigation of Former Federal Bureau of Investigation Director James Comey’s Disclosure of Sensitive Investigative Information and Handling of Certain Memoranda.”

Between Jan. 6, 2017, and April 11 of that same year, then-FBI Director James Comey memorialized seven one-on-one conversations he had with Donald Trump. Four of those memoranda contained classified information.

Two of the four—the first about an intelligence-assessment briefing he gave President-elect Trump in Trump Tower in New York City on Jan. 6, in which he also discussed the “salacious and unverified” information contained in the infamous Steele dossier, and the other pertaining to interactions he had with then-White House chief of staff Reince Priebus, then-national security adviser Michael Flynn, and Trump on Feb. 8—were classified at the “secret” level. (That’s defined as information that, if disclosed, “reasonably could be expected to cause serious damage” to national security.)

The other two—one detailing Comey’s conversation with Trump on Jan. 28, in which it’s alleged that Trump demanded “loyalty” from him, and one following a telephone conversation with Trump on April 11, in which Comey claims Trump asked whether the then-FBI chief had gotten the word out that Trump was not personally under investigation—were classified at the “confidential” level. (That’s the lowest level of classification, defined as information that, if disclosed, “reasonably could be expected to cause damage” to national security.)

While not containing classified information, the other three memoranda were designated “For Official Use Only” (which essentially prohibits disclosure unless approved by the “originator” and even then, only on a need-to-know basis).

Comey informed Justice Department Inspector General Michael Horowitz that he considered six of those memoranda to be his personal documents (all of the memos except for the one about the Trump Tower briefing). Two of those documents (including one that contained classified information) were prepared on his personal computer, and he kept copies of four of them (two of which contained classified information) in his personal safe at home.

After he was fired on May 9, 2017, Comey told a friend of his—Daniel Richman, a Columbia Law School professor who also worked as a special government employee at the FBI—about the loyalty oath that Trump allegedly demanded. Richman leaked that information to The New York Times, which published a story about it May 11.

On May 14, shortly after Trump hinted about the possible existence of tapes of his conversations with Comey, the former FBI chief provided copies of the four memoranda that he had retained to his personal attorneys.

Two days later, Comey sent a copy of one of the nonclassified memos—in which he recounts his Feb. 14 meeting with Trump, at which he claims that Trump said that he hoped Comey could “see [his] way clear … to letting Flynn go”—to Richman and asked him to leak it to The New York Times, which he did.

A story was published that same day.

Richman also informed the Office of the Inspector General that Comey told him about the Jan. 28 “loyalty” conversation with Trump and that he leaked that information to the Times reporter, although he had not yet seen Comey’s classified memo about that conversation at the time.

This isn’t the first time that the Office of the Inspector General has criticized Comey’s conduct. In June 2018, that office released a report criticizing Comey for his conduct related to the Clinton email investigation, known as Operation Midyear.

Although the Justice Department has declined prosecution—most likely because the information that was leaked to the media did not contain classified information—the inspector general concluded that Comey violated various Justice Department and FBI policies, as well as his own employment agreement with the FBI.

Horowitz also severely criticized Comey for “the unauthorized disclosure of sensitive investigative information, obtained during the course of FBI employment, in order to achieve a personally desired outcome”—specifically, the appointment of a special counsel to investigate Trump.

Horowitz stated that Comey “set a dangerous example for the over 35,000 current FBI employees—and the many thousands of more former FBI employees—who similarly have access to or knowledge of non-public information.”

While Comey might have believed that disclosure of that information was in the best interests of the country, Horowitz correctly concluded—as Comey himself had acknowledged previously in other contexts—that “were current or former FBI employees to follow the former Director’s example and disclose sensitive information in service of their own strongly held personal convictions, the FBI would be unable to dispatch its law enforcement duties properly … .”

Comey’s closest advisers informed the Office of the Inspector General that they were “surprised,” “stunned,” “shocked,” and “disappointed” by what Comey did.