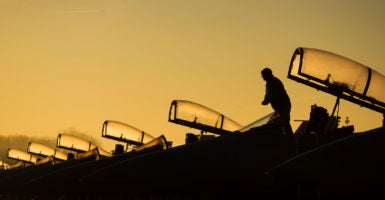 Staff Sgt. Joshua Matrine tends to a row of F-15C aircraft assigned to Leeuwarden Air Base in the Netherlands. (Photo: DoD/Sipa USA/Newscom)

Russia has re-emerged as a pernicious threat to Europe in recent years. It’s all the more vital for the U.S. to stand up for European allies and signal to Russia that we are committed to the ongoing defense of Europe.

One of the best ways to do that is by improving the way the European Deterrence Initiative is funded.

The European Deterrence Initiative was created to fund military deployments and operations in Europe as a way to show Russia that the U.S. stands by its commitment to the protection of its European allies, and thus deter Moscow’s growing presence there.

To improve its efficiency, the program should merge into the Defense Department’s base budget. Its current funding structure under temporary war funding suffers from unpredictability and a lack of prioritization, and its effectiveness is harder to assess.

The European Deterrence Initiative supported the largest reinforcement of the Euro-Atlantic defense in a generation and strongly represents our national interests. It reassures U.S. allies that they can count on the U.S. even now as Russia poses a major and increasing threat to European security.

Maintaining a strong presence in Europe not only deters Russia, but also upholds core American values in Europe, such as the rule of law, human rights, free markets, and democracy.

The program accomplishes these goals by increasing the military’s rotational deployments of soldiers, allowing increases in maritime deployments in places such as the Baltic and Black seas, increasing contributions to NATO’s Baltic Air Policing mission, increasing exercises and training opportunities, and building partner capacity in Europe.

It also has been credited with increasing NATO’s deterrence through improved readiness, more frequent exercises, increased NATO interoperability, and the forward deployments of U.S. forces in Norway, Poland, Romania, and the Baltic states, and increased maritime presence in these areas as well.

The European Deterrence Initiative has gone from a $1 billion program in its inception in 2015 to a $6.5 billion request for 2019. The most substantive jump took place from 2016 to 2017, when the fund increased from $800 million to $3.4 billion. Despite the level of success it has achieved, it is held back by the way it is funded.

Originally, the European Deterrence Initiative leveraged overseas contingency operations funding as a flexible and responsive way to provide the needed resources. Now with five years’ worth of accessible budget data of its own, that flexibility has devolved into hindrances to both its strength and viability.

Overseas contingency operations resources are projected only for the same fiscal year, but base budgets come with five-year projections that provide a more stable future for the effort. A more permanent source of funding would reassure our allies of our commitment to keep them safe.

The Government Accountability Office has reported the current funding mechanism is not ideal because it “does not establish priorities for EDI initiatives relative to those in the base budget, estimate long-term sustainment costs for some posture initiatives funded under EDI, or communicate future EDI costs to Congress.”

The Department of Defense inspector general has also agreed that the program’s absence from the base budget has impeded the ability to assess its impact separate from all other U.S.-funded support.

It is also important to make sure that other NATO countries are increasing their defense spending to reach the goal of 2 percent of gross domestic product so the U.S. does not have to carry an oversized burden.

Our allies are indeed increasing their spending to reach that goal, albeit at a slower pace than we would like. Only one NATO country, Estonia, reached the 2 percent guideline in the three years between 2014 and 2017.

The European Deterrence Initiative has been a valuable tool for U.S. efforts to deter Russia and maintain European stability. Without it, Russia will continue to push for more power and a greater influence over the region, which not only would threaten European security but global security as well.

Adding the European Deterrence Initiative to the Defense Department’s base budget will allow for better use of defense dollars and demonstrate America’s commitment and strength in the region to our allies.