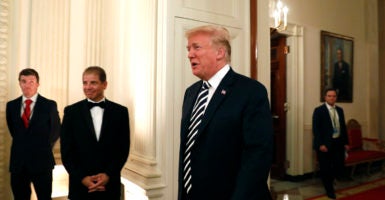 “Mary [Neumayr] is a strong conservative with all the expertise and experience necessary to implement President Trump’s ambitious agenda," says Myron Ebell, who was a Trump transition team leader. (Photo: Sipa USA/Newscom)

Neumayr, whose name Trump announced Tuesday night to lead the Council on Environmental Quality, has the backing of conservative leaders and key Senate Republicans. Supporters see her as a key player in implementing sweeping reforms to environmental laws holding back economic growth.

“I congratulate her on her nomination, and look forward to her confirmation,” Sen. Jim Inhofe, R-Okla., said in a statement to E&E News, which first reported Neumayr’s nomination Tuesday.

Neumayr has served as chief of staff on the Council on Environmental Quality since March 2017. She previously was senior counsel for the House Committee on Energy and Commerce from 2011 to 2017. Before that, Neumayr was a lawyer at the Energy Department and Justice Department.

Neumayr’s nomination comes about four months after the White House withdrew its nomination of Kathleen Hartnett White to head the Council on Environmental Quality.

Neumayr might prove more palatable for pro-ethanol GOP lawmakers, and could get backing from moderate Democrats. Ebell said her expertise in streamlining infrastructure permitting makes her a good candidate.

“The NEPA permitting process is being used by federal bureaucrats and environmental pressure groups to delay resource and development projects to death,” Ebell said. “Many major projects can now be stuck in red tape and then litigation for 10 or 15 years. Investors give up and move their projects to other countries where environmental permitting typically takes two to five years.”

Trump’s $1.5-trillion infrastructure plan includes sweeping changes to the National Environmental Policy Act, including a “one agency, one decision” policy to keep needless bureaucracy from bogging down major projects.

“Fixing the broken NEPA process is a big challenge, and Mary Neumayr is a good choice to take it on,” said Ebell, director of energy and climate policy at the free market Competitive Enterprise Institute.