Trump Challenges NFL Players to Put Up or Shut Up 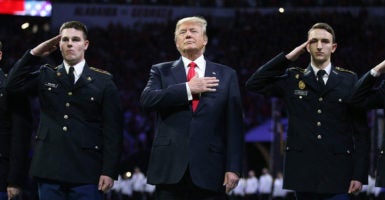 “I’m going to ask all of those people to recommend to me—because that’s what they’re protesting—people that they think were unfairly treated by the justice system,” Trump said at the White House before departing for the G-7 summit, according to the New York Post.

“I’m going to take a look at those applications, and if I find—and my committee finds—that they’ve been unfairly treated, then we’ll pardon them,” the president said. “Or at least let them out.”

He’s clearly been on a pardon spree.

The response to Trump’s proposal to the players will be quite telling.

One of the problems with the NFL’s kneeling movement is that it has a specific target—the national anthem and the American flag—yet nebulous demands.

Despite players’ claims otherwise, many fans say they believe the players are protesting America, the military, and law enforcement in general.

Trump’s proposal puts players on the spot. If they have specific concerns that they want addressed, certain injustices that are intolerable, the president says he will work with them to rectify those issues.

Major League Baseball doesn’t quite sit at the cultural height it once did in this country. The game has receded during the seemingly inevitable rise of the National Football League in particular.

But now the NFL has a huge problem on its hands.

The national anthem controversy has damaged the league among its most passionate fans. And it clearly has played a key role in the swift decline in viewers, especially in the past year when the protests and media coverage of them exploded.

This statistic, noted by New York Daily News, should be particularly concerning:

This is not a league that can thrive without a passionate fan base.

The NFL notably changed its policy for the upcoming season, electing to fine teams—though not individuals—for kneeling in protest during the anthem. Players who wish to protest now will be allowed to stay in the locker room while the song is played.

This is no guarantee that angry fans will suddenly be pleased again. And as we saw with the aborted White House visit by the Super Bowl champion Philadelphia Eagles, the protests and contention haven’t abated.

While many of these fans may never come back to the NFL, Trump has offered at least one resolution to the league’s problem.

Protesting players who are sincere about their goals should take the president’s challenge seriously.

If, instead, the movement is simply focused on protesting America as a racist country or is just resistance to Trump from the sports world, then the players and league will become further isolated from their unhappy fans, who mostly dislike the protests.

And if the league wants to save itself from constant protest, declining fan interest, and permanent politicization, then the players would be wise to at least consider Trump’s proposal and look to work with the president when he offers an olive branch.