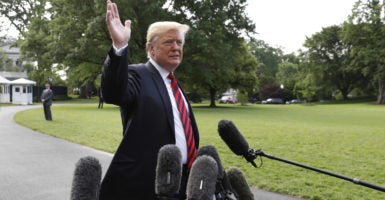 President Donald Trump waves after answering questions from the press—including one about a marijuana bill in Congress—before his departure from the White House to the G7 Summit in Canada. (Photo: Yuri Gripas/UPI/Newscom)

On Thursday, Sens. Cory Gardner, R-Colo., and Elizabeth Warren, D-Mass., announced legislation that would amend the Controlled Substance Act to exclude marijuana activities, but includes restrictions such as no distribution to people under the age of 21.

The president said only that he would “probably” support the legislation. Such a move would conflict with actions by his Attorney General Jeff Sessions.

The bill is called the STATES Act, an acronym for Strengthening the Tenth Amendment Through Entrusting States. It is also sponsored in the House by Reps. David Joyce, R-Ohio, and Earl Blumenauer, D-Ore.

Asked if he supported the legislation, Trump said, “I really do” Friday morning, before boarding Marine One enroute to the G7 summit in Canada.

“I support Sen. Gardner,” Trump told reporters. “I know exactly what he’s doing. We’re looking at it. But I probably will end up supporting that.”

Trump only referenced Gardner, the chairman of the National Republican Senatorial Committee, the campaign arm for GOP senators. He made no mention of backing a bill co-sponsored by political nemesis Warren.

“States like Massachusetts have put a lot of work into implementing common sense marijuana regulations–and they have the right to enforce their own marijuana policies,” Warren said in a statement announcing the bill. “The federal government needs to get out of the business of outlawing marijuana.”

The proposed STATES Act, if passed, would prevent most transactions under state law from violating federal law, but would include safeguards. The proposal:

Law enforcement officials have warned that most addictions to more severe drugs such as cocaine, heroin, and meth start from use of marijuana.

The first is that most states are not making a serious effort to limit the distribution of edible marijuana products in forms that are marketable to children, as if the products were candy.

The second concern, Larkin said, is that more legalized marijuana means more people likely driving under the influence of marijuana.

“I don’t think the president has thought about the issue in-depth,” Larkin told The Daily Signal. “He is think, as others do, about alcohol as a baseline and the marijuana is probably no worse than alcohol. The problem is that marijuana adds to the problem of alcohol. When you combine marijuana and alcohol, it will increase the number of people not safety operating motor vehicles.”

However, Gardner argued the current Justice Department stance is “closing its eyes and plugging its ears while 46 states have acted.”

“In 2012, Coloradans legalized marijuana at the ballot box and the state created an apparatus to regulate the legal marijuana industry,” Gardner said in a statement. “But because of the one-size-fits-all federal prohibition, state decisions like this put Colorado and other states at odds with the federal government.”