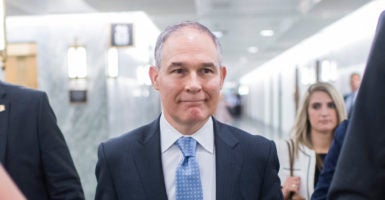 The EPA issued an advance notice that it will be collecting input from the public on how to restructure the cost-benefit analysis process within the agency. Pruitt held up former President Barack Obama’s administration as an example why the process needs improvement.

“Many have complained that the previous administration inflated the benefits and underestimated the costs of its regulations through questionable cost-benefit analysis,” Pruitt said in a statement. “This action is the next step toward providing clarity and real-world accuracy with respect to the impact of the agency’s decisions on the economy and the regulated community.”

One such example is the Clean Power Plan, enacted under Obama to cut carbon emissions from power plants. When calculating the impact of the regulation, the EPA under Obama found the social cost of carbon to average $36 per ton.

Economists criticized that measurement and others, alleging the EPA used metrics crafted to reach a certain outcome.

Under Pruitt, the EPA measured the social cost of carbon again and found it to be several times lower at only $5 per ton.