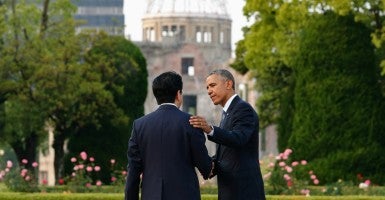 President Barack Obama’s speech at Hiroshima was a poignant discourse on the horrors of war. He spoke eloquently of the death of innocent lives and the hope for a better tomorrow. But his trip is fraught with the potential for misinterpretation.

As the end of his presidency approaches, Obama sought to resurrect his utopian vision of a world without nuclear weapons that he first articulated in 2009.

The Obama administration promised that the president’s trip would be focused on the future. But by delivering his remarks at Hiroshima, he needlessly resurrected painful and contentious historic issues.

In his remarks, the president did not explicitly apologize for the U.S. decision to use atomic weapons to end World War II as some had advocated. But he implicitly criticizes the “terrible force unleashed” at Hiroshima and laments “how often does material advancement or social innovation blind us to this truth? How easily we learn to justify violence in the name of some higher cause.”

His comments reflect an aloof view disdainful of all violence, lumping aggressors and defenders together. Hiroshima was a tragedy but so were all the lives lost in the preceding years of conflict.

Visiting the National World War II Memorial in Washington, D.C., is a sobering experience. The cascade of gold stars adorning the walls are a heart-rending depiction of the 400,000 American service members who died in both the Pacific and European theaters of war.

Each of the 4,048 stars represents 100 American deaths—sons, fathers, and brothers who never came home. Imagine the human tragedy if the number of gold stars were doubled, which would result from a full-scale Allied invasion of Japan.

Nor does Obama mention the millions of Japanese lives spared by the events at Hiroshima and Nagasaki. In his memoir, President Harry Truman wrote that after Japan rejected another plea for surrender, he had no qualms about his decision to drop the bombs “if millions of lives could be saved … I meant both American and Japanese lives.”

Emperor Hirohito announced to his subjects that he based his decision to end the war on the “new and most cruel bomb … Should we continue to fight, it would … result in an ultimate collapse and obliteration of the Japanese nation.” In addition, there are estimates that 100,000 to 250,000 non-combatants in occupied Asia would have died for every month that the war was extended.

Hiroshima reflects the tragedy not just of a weapon of war, but of aggressive regimes and the wars they impose. Rather than a utopian quest to eliminate nuclear arms, he should have called on nations to band together against the despots who still threaten to impose their will over weaker neighbors.

As Americans prepare to enjoy the Memorial Day holiday, we should reflect on the meaning of the day.

We honor the brave men and women of the U.S. military who for centuries have fought and made the ultimate sacrifice for freedom for ourselves and others overseas subjugated to despots. Many of those did so during the four years brought on by the attack on Pearl Harbor.

Rather than describing an idealistic vision of the future, perhaps Obama should have pondered George Orwell’s comment that “People sleep peacefully in their beds at night only because rough men stand ready to do violence on their behalf.”

As President Ronald Reagan declared in his inauguration speech, “The price for this freedom at times has been high, but we have never been unwilling to pay that price.”