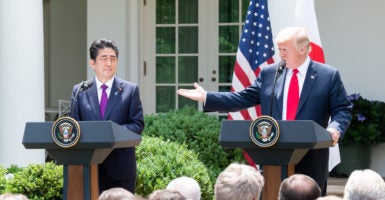 Days ahead of a historic meeting in Singapore, President Donald Trump said that if his summit with North Korean leader Kim Jong Un is successful, he would meet with Kim at the White House and is open to normalizing relations with the communist regime.

“If it goes well, I think that could happen,” Trump said Thursday during a Rose Garden news conference with Japanese Prime Minister Shinzo Abe, when asked if he would be willing to meet with the dictator in the United States.

Trump is scheduled to meet Tuesday with Kim in Singapore to discuss denuclearization of North Korea and the status of international sanctions on the country. The president said Americans will know how it goes based on the language he uses.

“You’ll know how well we do with the negotiation,” Trump said. “If you hear me saying we are going to use maximum pressure, you know the negotiation did not do well, frankly.”

The president said he would be open, ultimately, to normalizing relations with North Korea.

“Normalizing relations is something that I would expect to do,” Trump said.

Secretary of State Mike Pompeo juxtaposed this with what he called a “flimsy piece of paper”—the Iran nuclear deal reached under President Barack Obama’s administration.

One of the president’s personal lawyers, Rudy Giuliani, said earlier that Kim “got on his hands and knees and begged” Trump to have the meeting after the president scrubbed it some days ago.

But Pompeo said the former New York mayor was speaking in jest.

“I know Rudy, but Rudy doesn’t speak for the administration when it comes to this negotiation, this type of issues,” Pompeo said.

Earlier in the day, Trump said he doesn’t need to prepare for the meeting with Kim.

“I think I’m very well prepared,” Trump said. “I don’t think I have to prepare very much. It’s about attitude. It’s about willingness to get things done. But I think I’ve been prepared for this summit for a long time.”