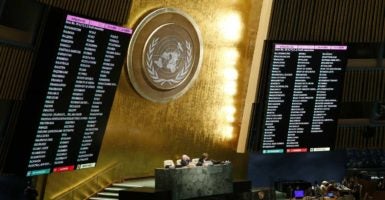 For the first time ever, the United States abstained from voting on a United Nations resolution condemning America’s embargo on Cuba.

This breaks decades of bipartisan support for U.S. law on the international stage. It shows just how far the Obama administration is willing to take its misguided and ill-informed Cuba policy.

For the past quarter century, the Castro regime annually introduced a U.N. General Assembly resolution blaming America’s trade embargo for the island’s chronic economic and social problems and calling for the end of the embargo. Until Wednesday, the U.S. always has voted against the resolution, often standing virtually alone in defense of human rights and democracy for the Cuban people.

U.S. Ambassador to the U.N. Samantha Power celebrated the abstention by declaring the U.S. was closing the door on “50-plus years of pursuing isolation,” in favor of choosing the “path of engagement” in order to be better able to empower the Cuban people.

This is no cause for celebration. The U.S. embargo is not the source of the suffering of ordinary Cubans, but rather the Castro regime and its economically destructive policies. Over 190 countries do not observe the U.S. embargo and engage with Cuba economically and diplomatically, and yet there has been no positive change on the island.

If “engagement” with the rest of the world has not alleviated economic hardship or produced positive political change in Cuba, then the Obama administration and the international community must realize that it has been the policies of the Castro regime itself that have led to the deplorable conditions on the island.

The Obama administration made this exact argument as recently as 2014, when U.S. Ambassador Ronald D. Godard stated in explanation of America’s vote against the Cuba resolution:

The Cuban government uses this annual resolution in an attempt to shift blame for the island’s economic problems away from its own policy failures … the Cuban economy will not thrive until the Cuban government permits a free and fair labor market, fully empowers Cuban independent entrepreneurs, respects intellectual property rights, allows unfettered access to information via the internet, opens its state monopolies to private competition, and adopts the sound macroeconomic policies that have contributed to the success of Cuba’s neighbors in Latin America. …

The United States strongly supports the Cuban people’s desire to determine their own future, through the free flow of information to, from, and within Cuba. The right to receive and impart information and ideas through any media is set forth in Article 19 of the Universal Declaration of Human Rights. It is the Cuban government’s policies that continue to prevent enjoyment of this right. …

This resolution only serves to distract from the real problems facing the Cuban people, and therefore my delegation will oppose it … We encourage this world body to support the desires of the Cuban people to choose their own future. By doing so, it would truly advance the principles the United Nations Charter was founded upon, and the purposes for which the United Nations was created.

Abruptly abandoning America’s principled position of championing the Cuban people against the repression of its government is a disgrace.

Repealing the embargo, which is the aim of the U.N. resolution on which the U.S. abstained Wednesday, will do nothing but further empower the brutal Castro regime. It would also serve to diminish the leverage we would bring to any engagement we have with Cuba. The U.S. must recognize that it is the Castro regime that needs to change its policies first, not the other way around.

It is one thing for the Obama administration to pursue its reckless policy toward Cuba domestically, but quite another to fail to defend our nation against a U.N. resolution attacking America’s laws and established policy. It demonstrates a shocking disregard for its responsibility to loyally represent and defend our nation and its policies in international organizations.

Unfortunately, the potential for damage by the Obama administration in the U.N. is not limited to fecklessness on nonbinding Cuba resolutions in the General Assembly.

The Palestinians are reportedly sounding out the Security Council in another attempt to secure full U.N. membership and demand a halt to Israeli settlements. Would anyone be surprised if the Obama administration changed its position on this as well?