How UN Conferences Have Created a False Climate Narrative 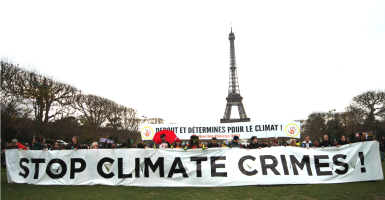 Last week in Paris, I had the pleasure of speaking at an event hosted by the Heartland Institute, the Competitive Enterprise Institute (CEI) and Committee for a Constructive Tomorrow (CFACT). The conference, entitled “A Day of Examining the Data” brought climatologists to talk about the state of climate science and economists to talk about the importance of free market energy policy.

The press conference was met with protestors. One organization even created “Wanted” posters of the “seven biggest climate criminals attending the Conference of Parities (COP21) Paris climate summit” including folks from CEI and Heartland. (I must be on the watch list). My remarks centered around the importance of getting energy policy right and the many, many problems that arise when policymakers get it wrong.

Conferences, such as COP21 in Paris, remind me of Albert Einstein’s famous remark on the definition of insanity: “doing the same thing over and over again and expecting different results.”

Year after year, leaders around the world have claimed that these sort of negotiations are the earth’s last best hope, but are they really?

We’ve been hearing politicians say this for three decades now, but what remains the same is that although developed nations want developing nations to commit to carbon cuts, they won’t.

No matter what developing nations commit to, it’s smoke and mirrors. The fact remains that developing nations, such as China and India are more concerned with economic growth. The title of a recent Reuters article says it all: “India says Paris climate deal won’t affect plans to double coal output.”

The COP process has, however, been critical to building the narrative that drives much of today’s global warming policy. Paris and the “success” of the negotiations made that more clear than ever.

Specifically, the process has effectively penetrated the body politic of many nations with the idea that man-made global warming is a problem that world governments must act to solve. Ending the use of conventional fuels like coal, oil and natural gas is central to their solution. President Barack Obama’s CO2 regulation successes are testament to the COP processes influence.

Unfortunately for Americans (and everyone around the globe), we have paid a steep price for the creation of the United Nations Framework Convention on Climate Change and attempts to decarbonize the globe’s energy use. The framework perpetuates the notion that CO2 can only be harmful.

Although the signed agreement by 195 countries to cut CO2 emissions are voluntary, it expresses that the need to reduce global warming is urgent and reducing greenhouse gas emissions and funding green technologies is the path forward to do so.

If the U.S. and other countries remains a part of the framework, respective governments will continue to regulate natural resources to raise their prices and make them less competitive and use taxpayer money to subsidize their preferred energy technologies.

We’ve already seen this happen in the U.S. over several decades. Taxpayer-funded subsidies and regulations supporting domestic and international efforts to reduce carbon dioxide are driving up energy prices, wasting taxpayer money, and distorting energy markets that reward connections to the government over market viability.

The Benefit of Fossil Fuels

Approximately 80 percent of America’s energy needs, and 80 percent of the world’s energy needs, are met by fossil fuels. And it’s not because of any government policy or centrally-planned energy policy, but simply because these energy sources provide households and businesses with the most reliable electricity and transportation fuel at the most affordable price. Thus, decarbonizing the economy, as these international efforts and regulations from the Obama administration’s Environmental Protection Agency aim to do, has significant adverse impacts on wealth and prosperity.

And this if far from just a U.S. problem.

One of the most egregious deceptions perpetrated by the U.N. and proponents of action on climate change is the “better safe than sorry” approach.

Proponents of global warming regulations argue that it’s better to have these policies in place on the off chance something bad could happen from increased manmade emissions – even if climate data shows otherwise.

In fact, the principles of the 1992 climate convention states:

“Where there are threats of serious or irreversible damage, lack of full scientific certainty should not be used as a reason for postponing such measures, taking into account that policies and measures to deal with climate change should be cost-effective so as to ensure global benefits at the lowest possible cost.”

Much of the sentiment exists in the Paris framework.

When you hear those words, it sounds as if the policies to reduce greenhouse gas emissions are pretty painless. It’s as simple as cautiously looking both ways before you cross the street. When it comes to climate change, use of the precautionary principle ignores the costs, risks, and unintended consequences of decarbonizing the world. Almost all the activities that drastically improve our quality of live require energy.

The overall theme of Heartland’s conference was this: Global warming policies are a costly non-solution to a non-problem. The agreement reached in Paris will only serve to implement more of those policies.