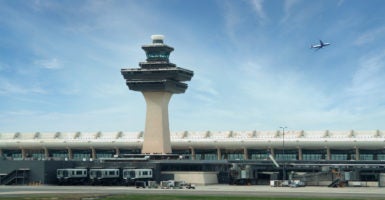 “A group within the FAA, including the human resources function within the FAA—the National Black Coalition of Federal Aviation Employees—determined that the workforce was too white,” attorney Michael Pearson said on Fox. (Photo: narvikk/Getty Images)

The D.C. federal judge’s ruling not only allows plaintiff Andrew Brigida’s suit to move forward, but reignites the controversy over what critics call the Obama administration’s decision to put “diversity over safety” at the FAA.

“We are grateful that the court will allow us to pursue the remedy that can make Andrew Brigida whole for his injuries,” Christian Corrigan, an attorney at the Mountain States Legal Foundation, told The Daily Caller News Foundation.

Friedrich, a Trump appointee, is the same judge who smacked down special counsel Robert Mueller’s request to delay the court hearing for Russian citizens and internet companies facing criminal charges for their actions during the 2016 election.

“The Court does not reconsider prior orders lightly,” Friedrich wrote in her opinion, granting Brigida’s motion for reconsideration.

“But these errors, if left undisturbed, would work injustice by preventing Brigida from pursuing relief to which he may be entitled,” Friedrich wrote.

“Going forward, we are determined to expose the discrimination that was perpetrated at the highest levels of the Obama FAA and vindicate the constitutional rights of thousands of qualified air traffic control applicants,” Corrigan said.

Former President Barack Obama’s administration implemented a plan to “transform” the FAA into “a more diverse and inclusive workplace,” FAA Administrator Michael Huerta announced in May 2013. The decision was backed by administration officials and labor unions.

The FAA based its decision on a 2013 report claiming “women and minorities were underrepresented among those successfully completing the [Air Traffic Control Specialist] Centralized Hiring Process and being hired.”

After the announcement, the FAA notified Brigida and thousands of other applicants to become air traffic controllers their Air Traffic Selection and Training, or AT-SAT, scores were no longer valid, and they instead would have to pass a “biographical questionnaire” before being allowed to re-apply.

Traditionally, the FAA gave preference to veterans, airline pilots, and individuals who passed the AT-SAT. The Obama administration policy was meant to field more minority applicants.

The “biographical questionnaire” awarded more points to applicants less qualified than the FAA used to tap for hiring, including awarding more points to individuals with a lower aptitude in science and who’d been unemployed for the previous three years.

The Mountain States Legal Foundation filed suit in 2015 on behalf of Brigida and at least 2,000 other air traffic controller applicants who had their AT-SAT scores invalidated by the Obama administration’s diversity policies.

The “FAA failed to validate the biographical questionnaire to ensure the test was in accord with the law and professional guidelines,” reads the suit filed in 2015, which was amended in 2016.

The nonprofit legal group claimed the FAA’s actions were unconstitutional, violating the equal protection clause and Title VII of the Civil Rights Act of 1964.

However, a federal judge in Arizona ruled against Brigida in late 2016, granting the federal government’s motion to dismiss the case. Mountain States Legal Foundation quickly filed a motion with the D.C. District Court to reconsider the case.

The case languished in the D.C. circuit—that is, until Friedrich revived it in late May. The suit has only picked up steam since.

Carlson interviewed attorney Michael Pearson who, along with the Mountain States Legal Foundation, is handling the case on behalf of Brigida.

“It’s the safety of the national airspace that’s at risk here,” said Pearson, a former air traffic controller himself.

Pearson said the Obama administration’s emphasis on diversity among air traffic controllers was driven by forces within the FAA and labor unions.

“A group within the FAA, including the human resources function within the FAA—the National Black Coalition of Federal Aviation Employees—determined that the workforce was too white,” Pearson said on Fox.

“They had a concerted effort through the Department of Transportation in the Obama administration to change that,” Pearson said.