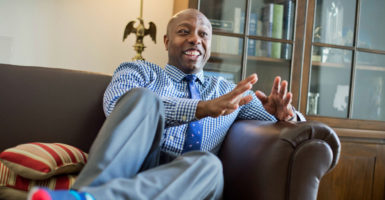 Sen. Tim Scott, R-S.C., noting that Republicans have an edge on Democrat colleagues in this department, said he wants to encourage his colleagues to find and bring on board qualified minority applicants.

“We have one of the most diverse staffs in the Senate, and that means you get more information with different perspectives than my other colleagues, which has been very helpful,” Scott told The Daily Signal in an interview.

Of 336 top personal staffers for the Senate’s 100 members, including chiefs of staff or legislative directors, only three were black in 2015, the Joint Center for Political and Economic Studies’ racial diversity study reported. (Note: The initial version of this story incorrectly put the number at five.)

Today, five of those top staffers are black: One works for a Democrat and the other four work for Republicans.

Of 39 directors of majority and minority staffs for official Senate committees, the center also found in 2015, one was African-American. (Note: The initial version of this story incorrectly said no staff director was black.)

Currently, none of the staff directors is black or Latino, said Spencer Overton, president of the Joint Center for Political and Economic Studies, which describes itself as a nonpartisan, nonprofit public policy organization “that supports elected officials and policy experts who serve communities of color across the country.”

The study did not explore diversity in terms of sex, religion, or sexual orientation.

For a Democratic Party that prides itself on embracing diversity, Scott said, the lack of it among Democrat staffers on Capitol Hill doesn’t make much sense.

“We are oftentimes maligned as the party that doesn’t open the door of opportunities,” Scott said of Republicans, “whereas the other side of the aisle is celebrated for being the party of opportunity, when in fact there may be room for improvement in their staff numbers.”

Scott’s 17-member staff on Capitol Hill includes nine individuals who are black, Hispanic, or Asian, or who have developmental disabilities. When women are included, the number rises to 13,  communications director Sean Smith said.

South Carolina’s Scott is the only black Republican in the Senate, where California’s Harris and New Jersey’s Cory Booker are the only black Democrats.

DeCasper, Scott’s chief of staff, says diversity in leadership “starts from the top.”

Those who serve as leaders determine how diverse their parties will be, regardless of their claims, DeCasper said.

“I do know that it starts from the top,” DeCasper, who is African-American, said in an email to The Daily Signal. “If the folks at the top aren’t intentional about diversity, then the office is going to reflect that.”

It takes effort, she said.

“There has to be a real intentionality about diversifying your office,” DeCasper said. “It may take a little longer, it may take reaching into communities you don’t normally turn to for resumes, but it’s worth it.”

Overton told The Daily Signal in a phone interview that the lack of diversity on Senate Democrats’ staffs stems from a lack of a pool of candidates to pull from.

Paid internships, Overton says, are a way to build a pool of diversity:

So if you think about it, most internships are unpaid on the Hill. There are a lot of people of all racial backgrounds who do not have the money to actually enter in that internship entryway to an entry-level job later on. Our pool already is not a strong pool because of the lack of paid internships.

Scott, however, says it is important to hire individuals based on experience and qualifications for a particular position, not single out diversity as the one stipulation for hiring.

“We don’t want to encourage folks to hire minorities for the sake of hiring minorities, but to hire the right person for the right job without any exclusions,” Scott said.

@cspan Proud of my boss @SenatorTimScott and reading our #meantweets

House Speaker Paul Ryan, R-Wis., is leading by example in that chamber.

In December, Ryan hired Jonathan Burks, a veteran Hill aide who is black, as his chief of staff. The hire made Burks the highest-ranking staffer in the House who also happens to be African-American.

Senate Minority Leader Chuck Schumer, D-N.Y., decided to introduce  diversity rules this month for Democrats “under pressure from party members and some of their own employees,” The Washington Post reported.

Democrats’ Senate offices “are now formally encouraged to consider at least one minority candidate when interviewing for an open position,” Roll Call reported.

The new rules, The Washington Post reported, model the so-called Rooney rule, which it described as “an NFL policy that requires teams to interview minorities for any head coaching or senior football operations positions.”

Scott told The Daily Signal that there are plentiful opportunities where conservatives can bring in staffers whose diversity will contribute significantly to Congress and embody the convictions of members:

As an African-American Republican who gets a whole lot of hate mail [and] a whole lot of poking because of my affiliation with the conservative party, when I look around the Senate [I see] real opportunities to make a difference. There’s no question that every single staff member is very valuable, but the top of the food chain, from a staff perspective, remains empty.

She can’t speak for Democrats, DeCasper said, but her friends on the other side of the aisle say they are “troubled” by the lack of diversity on Democrats’ staffs.

“When I talk to my Democrat friends about this issue they are really, really troubled,” DeCasper said.

The disappointment is warranted, she said.

“I think it’s because their hearts hurt about it,” DeCasper said, adding:

We all pick our parties based on what’s best for our beliefs. And when you see the party that you love, the party that you defend and support, not actually caring about one of what I believe many think are the underpinnings of their ideology—diversity—it hurts.  And rightfully so.

Scott said building a more diverse staff  isn’t about gaining the spotlight, but bringing in qualified individuals to serve the public.