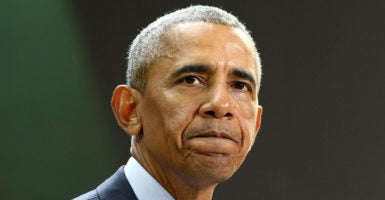 Remember Obamacare? The fight is far from over on the future of the Obama-era health insurance overhaul.

Republicans are making a list-ditch effort this year to turn the program and the money over to the state. This isn’t full Obamacare repeal, but would make a world of sense because states would be free to experiment and find ways to reduce costs and provide better services.

Democrats are adopting a new political spin, which is that everything is fine with Obamacare. They claim that the only reason premium and deductible costs keep exploding is because President Donald Trump repealed the individual mandate tax—which was nothing more than an unfair penalty on low-income families that can’t afford the high cost of the health law’s mandates.

But if Trump is to blame, why were the costs skyrocketing two years before Trump even entered the Oval Office?

The clear-eyed reality is that things aren’t going well with Obamacare. The predicted death spiral in the insurance market—higher costs cause more healthy people to drop coverage, which raises prices even more, and the cycle continues—is now irrefutably upon us. This law should really be renamed the UCA: the Unaffordable Care Act.

Here are eight reasons Obamacare needs to be repealed now, more than ever.

1. Health insurance is more expensive than ever.

Remember the promise that the average family would save $2,500 a year on health insurance? Forget about it.

In May 2017 the Department of Health and Human Services reported that average health insurance premiums doubled since 2013. How many families’ incomes doubled over that same period?

In 2018 costs have risen by another 19 percent for high-cost plans and 32 percent for the cheapest plans, according to a study by the Urban Institute. Overall inflation for all other goods and services are running at 2 percent.

3. Obamacare has not stopped the stampede of rising health care costs.

Instead of “bending the cost curve down,” national expenditures on health care continue to rise.

The year before Obamacare was fully implemented, health care amounted to 17.2 percent of U.S. gross domestic product. Last year that tab grew to 18.3 percent—an increase of almost $200 billion in health spending. The latest forecast for 2025 is that medical expenses will reach almost 20 percent of GDP.

According to Kaiser, the average deductible for people with employer-provided health coverage last year was $1,221 compared to $303 in 2006. Usually, you pay higher deductibles for lower premiums. Under Obamacare, you pay more when you get your hospital bill.

According to federal and state data of insurer exchange options per county, more than 50 percent of our nation’s counties have only one insurer in 2018. Over 30 percent of counties are limited to two insurers. This means roughly 4 of 5 counties will have either just one or two Obamacare exchange insurers to choose from.

The vast majority of Americans who have received insurance under the Obamacare law have enrolled in Medicaid. Medicaid enrollment has soared from 55 million to 74 million since 2013. Yet many physicians, health clinics, and hospitals don’t accept Medicaid. This means tens of millions of Americans often can’t choose the doctor, hospital, or treatment of their choice.

On April 1, 2014, standing in the Rose Garden at the White House, President Barack Obama claimed that the Affordable Care Act meant “everybody” would have health insurance. Today, some 30 million Americans remain uninsured to this day.

Why? Families can’t afford the insurance.

In 2012, the Congressional Budget Office estimated that Obamacare exchange enrollment would increase by 9 million by 2016. Instead, an underwhelming 400,000 increase occurred, which is a staggering 96 percent reduction in the anticipated growth of net-ACA exchange enrollment.

Obamacare does not allow patients to buy insurance across state lines, which would dramatically increase competition and lower costs. It does not allow small business-associated health plans. It limits low-cost health savings accounts options. It has no provisions for capping medical malpractice costs—because Democrats were bought off by the trial lawyers.

Let’s summarize what we have gotten for our money under Obamacare. We have spent hundreds of billions of dollars already; we have massively increased the size of the federal budget; we have subsidized insurance plans to get Americans to sign up for Obamacare; we have penalized people if they don’t buy Obamacare (until that law was repealed); but we still have almost 1 in 11 Americans without insurance.

Has there ever been a bigger public policy flop?

I recently debated a high-ranking Obama White House economist and asked him: What was the greatest accomplishment of Obama in eight years in office? He replied: the Affordable Care Act.

Really? If this is Obama’s grand success, imagine how bad the failures were.