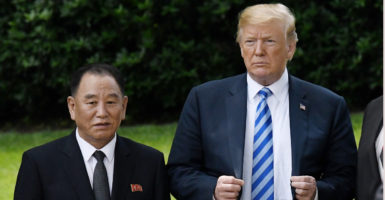 After meeting with a top envoy from North Korea, President Donald Trump said that the on-again, off-again meeting with Kim Jong Un is on again.

“It’s a getting-to-know-you meeting, plus,” Trump told reporters of the June 12 encounter in Singapore.

Trump added that past presidents should have addressed the nuclear program of the communist dictatorship, but said the matter is left to him.

While denuclearization will likely come with sanctions relief, Trump said he didn’t want to use the term “maximum pressure” any longer when talking about sanctions, and said he and the North Korean diplomat did not discuss human rights.

Trump said Kim Yong Chol was there to deliver a letter.

“It ended up being a two-hour conversation with the second-most powerful man in North Korea,” Trump said. “We talked about a lot of things. The big deal will be on June 12. It’s a process, we aren’t going to go in and sign something on June 12.”

Trump said more than one meeting is likely needed to reach a deal.

Trump noted he hadn’t read the letter, and joked, “I may be in for a big surprise, folks.”

The announcement comes a week and a day after Trump had cancelled the meeting. The unlikely thaw in the relationship appeared highly unlikely to occur before the envoy’s visit.

“I think you’re going to have a very positive result in the end,” Trump said. “We will see what we will see.”

The president said, “The relationships are building and that’s a very positive thing.”