What’s Next: 3 Possible Scenarios on North Korea After Cancellation of Trump-Kim Summit 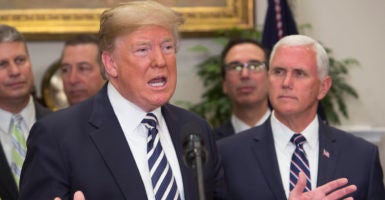 President Donald Trump talks about the cancellation of talks with North Korea on Thursday at the White House. (Photo: Chris Kleponis/ CNP/SipaUSA/Newscom)

The summit was set for June 12 in Singapore, but Kim for weeks had threatened to cancel it, and more recently a North Korean official personally insulted Vice President Mike Pence.

A senior White House official told reporters Thursday that the North Korean government’s “trail of broken promises gave the U.S. pause.” That included last week, when the North Koreans “stood up” a U.S. delegation in Singapore and Pyongyang’s canceling a recent meeting with the South Koreans, the official said.

Choe Son Hui, vice minister of the North Korean Foreign Ministry, said, “As a person involved in the U.S. affairs, I cannot suppress my surprise at such ignorant and stupid remarks gushing out from the mouth of the U.S. vice president.”

Pence had said North Korea could end up like Libya—a failed state after its leader was ousted and killed—if the regime didn’t make a deal. Previously, North Korean officials noted that after Libya eliminated its nuclear program in 2003, the United States helped rebels overthrow the government in 2011.

That comment about the vice president was surely authorized. If it had not been authorized by Kim himself, the Foreign Ministry official would have been dealt with harshly by the North Korean strongman, one foreign policy analyst observed.

“Based on the tremendous anger and open hostility displayed in your most recent statement, I feel it is inappropriate, at this time, to have this long-planned meeting,” Trump wrote to Kim. “If you change your mind having to do with this most important summit, please do not hesitate to call me or write.”

Sadly, I was forced to cancel the Summit Meeting in Singapore with Kim Jung Un. pic.twitter.com/qEoi9ymUEz

The North Korean rhetoric by itself likely didn’t short-circuit the meeting, said Howard Stoffer, a former Foreign Service officer and later director of counterterrorism for the United Nations Security Council.

“I don’t think this was canceled because of what the North Korean official said about Mike Pence. I think President Trump just wasn’t prepared,” said Stoffer, now a criminal justice professor at the University of New Haven in Connecticut.

Offering a different possible explanation, Frank Gaffney, president of the Center for Security Policy think tank, said the cancellation could be part of a broader negotiation strategy.

“If this has actually been canceled, I would breathe a sigh of relief, but I don’t think it is,” Gaffney told The Daily Signal. “I think this is ‘The Art of the Deal’ playing out. For both, they are jockeying. Now, the president is putting the ball back in Kim’s court.”

Here are three potential scenarios going forward for how the United States will deal with North Korea.

The North Korean vice foreign minister’s more alarming comment in the statement in which he criticized Pence was asserting that whether the United States “will meet us at a meeting room, or encounter us at nuclear-to-nuclear showdown, is entirely dependent upon the decision and behavior of the United States.”

Trump’s letter to Kim continued, “You talk about your nuclear capabilities, but ours are so massive and powerful that I pray to God they will never have to be used.”

In Trump’s remarks Thursday at the White House, he had a further warning for North Korea.

“Hopefully, positive things will be taking place with respect to the future of North Korea. If they don’t, we are more ready than we have ever been before,” he said, adding later: “Our military, as you know, has been greatly enhanced, will soon be at a level it has never been before.”

Trump expressed hope for continued negotiations and an eventual summit with Kim.

“Hopefully, everything is going to work out well with North Korea, but a lot of things can happen, including the fact that perhaps the existing summit could take place, or a summit at some later date,” Trump said. “Nobody should be anxious. We have to get it right.”

The United States has demonstrated resolve, and the negotiations will likely be on-again, off-again, said Rep. Jeb Hensarling, R-Texas.

“We have made progress. There has been a setback today, and I believe ultimately this summit could be back on,” Hensarling told The Daily Signal after attending a bill signing at the White House on Thursday.

“Anytime you deal with North Korea, it is an unfortunate roller coaster ride. I’m confident, again, the president has let it be known that the American people have resolve, but ultimately, we would like to have a diplomatic solution. That hasn’t changed,” Hensarling said.

A new summit should be more thoroughly planned, said Bruce Klingner, a senior research fellow for Northeast Asia at The Heritage Foundation who previously worked for 20 years for the Central Intelligence Agency and the Defense Intelligence Agency.

“We Korea-watchers wanted a more bottoms-up approach, rather than an immediate meeting between heads of state,” Klingner told The Daily Signal.

“We need those who can examine ‘the devil in the details’ and land mines in the road before publicly committing to a summit,” he said. “The administration seems to be taking a different view now and is more concerned about getting it right.”

The senior White House official said Thursday that the United States has applied that bottoms-up method for years and that it hasn’t brought North Korea closer to denuclearization.

In his remarks at the White House on Thursday, the president said, “Our very strong sanctions—by far the strongest sanctions ever imposed—and maximum-pressure campaign will continue as it has been continuing.”

However, the sanctions could get stronger, said Rep. Andy Barr, R-Ky., chairman of the House Financial Services’ Monetary Policy and Trade Subcommittee, which has oversight of the Treasury Department’s implementation of sanctions.

Barr wrote legislation named for Otto Warmbier, an American who was mistreated while incarcerated in a North Korean prison and died shortly after his release. The House passed the Otto Warmbier North Korea Nuclear Sanctions Act by a vote of 415-2 on Oct. 24.

“That legislation that is in the Senate right now represents the toughest economic sanctions ever directed at Pyongyang,” Barr said at the White House on Thursday.

This legislation is there for a reason. The Senate has the opportunity to pass it, to again put additional pressure on North Korea.

The bill simply says this: If you are a foreign financial institution, you have a choice. You can either do business with North Korea, or you can do business with the United States. But you cannot do both.

If North Korea is unwilling to sit down in good faith to denuclearize the peninsula, there is more pressure on the way.

The senior White House official said the Treasury Department is constantly evaluating targets, such as other companies and ships for additional sanctions.

“It seems that North Korea was just playing the same games they have in the past,” Ruggiero, now a senior fellow at the Foundation for Defense of Democracies, told The Daily Signal. “We should go back to maximum pressure, which has worked in the past and can be successful. Kim knows he can’t continue to pay his generals, and pay his elites, and pay for his own weapons program. Robust sanctions will be key.”