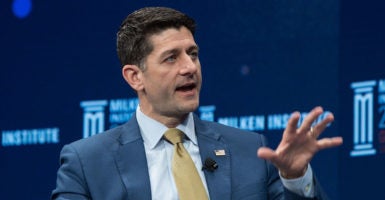 House Speaker Paul Ryan isn’t OK with the current poverty rate in the United States, especially considering how much money taxpayers have spent to combat it over the past half-century.

“We are coming [up] on the 50th anniversary on the War on Poverty. We were looking at the fact that trillions of dollars had been spent, and the poverty rates were stubbornly similar. Meaning, we really didn’t move the needle,” the Wisconsin Republican said on May 9 in an exclusive conversation with Kay Coles James, president of The Heritage Foundation.

Government does have an important role to play in fighting poverty, Ryan said, but it must be engaged responsibly to avoid wasting time and money.

The War on Poverty, the creation of President Lyndon B. Johnson, advocated for government programs as the solution. Ryan said:

We basically took so many Americans who were not poor and pushed them off to the sidelines and told them, “Don’t worry about it. Pay your taxes. Government will fix this problem. Which is false.

That, to me, is one of the mistakes that was made with this War on Poverty, which was to displace the human condition, the local control, the local institutions, a civil society, which is the space between ourselves and our government, which has been atrophying because government has been displacing it.

The right policies, however, can reduce poverty and expand the workforce, the Wisconsin lawmaker said.

“As conservatives, we always believe in equality of opportunity. I believe in the American idea that the condition of your birth does not determine the outcome of your life in a free society, with a free economy and freedom and limited government that helps the most people flourish as possible,” Ryan said.

“Our conservative principles apply to the problems of the day, give lift to the least among us,” he added, noting there are greater societal benefits from combating poverty beyond growing the workforce.

Ryan, who last month announced he’s leaving Congress after more than 20 years in Washington at the end of this term, shares a passion with Mrs. James for welfare reform. Both draw inspiration from personal experience.

At 16 years old, Ryan lost his father to a heart attack. His mother went back to school so she could start a business and provide for her family.

The experience had a profound impact on the speaker-to-be.

“My mom had to go back to school, got on a bus every day to Madison, Wisconsin,” he said. “The example that I saw, my mom pursuing an education after she and I were at home with my [grandmother with Alzheimer’s] was a great example to me. The work ethic my mom displayed, the courage she displayed.”

James grew up with a mother on welfare and a father addicted to alcohol.

“My definition of a black conservative is someone who has the audacity to believe their grandmother. [She] was the best anti-poverty program I ever knew,” James said. “The values that she put into us. The things that she instilled in us.”

“What’s exciting about this moment, and this time, jobs are out there. The economy is growing. The [jobless-claims] rate is at a [48-year] low. The unemployment rate is at an 18-year low. We have 6.6 million jobs available right now in America. We have 12 million able-bodied adults who are working age, who could work, who aren’t,” he said. “We have people we want to pull off the sidelines and get them into work so that they can get on the escalator of life.”