What’s Next for Epstein Investigation 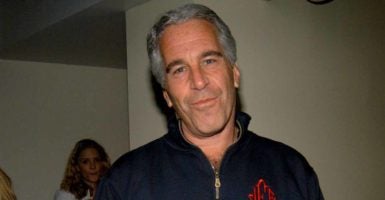 Jeffrey Epstein, pictured in 2005, died Saturday. Now questions are swirling about how the financier, accused of sexual assault of minors, was able to commit suicide in prison. (Photo: Neil Rasmus/Patrick McMullan/Getty Images)

What’s going to happen in the Justice Department investigation of the death of Jeffrey Epstein? Is there any hope for his victims to get justice yet? And what about the high-profile figures with ties to Epstein? Heritage Foundation’s John Malcolm joins us to discuss. Read the transcript, posted below, or listen on the podcast:

Daniel Davis: We are joined now in studio by John Malcolm. He is the vice president of the Institute for Constitutional Government here at The Heritage Foundation.

John, thanks for being back on.

John Malcolm: Happy to be here.

Davis: So many folks are outraged that Jeffrey Epstein was able to commit suicide, as it appears he did in prison. What do we know at this point about what happened in that prison cell?

Malcolm: We don’t know much other than the fact that Jeffrey Epstein died. And although there are a lot of theories that he didn’t do so voluntarily, most people believe that he, in fact, committed suicide.

He was in the cell by himself. I gather his cellmate had been removed several hours before he was found dead.

The other thing that is known is that this is a guy who was in isolation at the MCC, that’s the Metropolitan Correctional Center. He had been on a suicide watch. He had a court appearance not terribly long ago, in which there were ligature marks found on his neck, and he was on a suicide watch.

So he was seeing a psychiatrist daily, and there was supposed to be people who were supposed to come by every 30 minutes to check on him. Obviously, there would be objects with which he could harm himself that would be removed from his cell, and for reasons that have yet to be explained, he was taken off of a suicide watch.

Rather shocking, considering the fact that one, that were indications he’d already tried to kill himself. Two, that just a couple of days beforehand there was a tranche of documents that were released that will prove quite embarrassing to the people named in those documents.

It was suggestive that they … through Jeffrey Epstein had had sexual encounters with under-aged, I assume, only girls. Among the people named were Prince Andrew and former Maine Sen. George Mitchell and former U.N. Ambassador and New Mexico Gov. Bill Richardson. These were very, very prominent people.

So you would think that Jeffrey Epstein would be very depressed about these revelations, and they were all the more reason to keep him under a suicide watch. And to quote Attorney General Bill Barr, it’s appalling that he was not, and I’m glad that someone will conduct a thorough investigation to find out what happened. But of course Jeffrey Epstein is now dead, and there’s nothing that’s going to bring him back.

Malcolm: Well, for one, I assume there’ll be several investigations, but he said he’s spoken to Michael Horowitz, who’s the Department of Justice’s inspector general.

I happened to know Michael Horowitz. We worked together at the Department of Justice. I consider him a friend. And as I’ve said before, I think that Michael Horowitz is the consummate professional, and an incredibly thorough guy.

I assume that they will talk to the guards and any inmates that were in contact with Jeffrey Epstein in the days and hours before he killed himself, to find out whether he was depressed, whether he told anything to anybody, and they will find out how this could possibly have happened.

Of course, the criminal case against Jeffrey Epstein is now over. We don’t have posthumous trials or trials in absentia. There’s still going to be civil suits that are ongoing by the victims of Jeffrey Epstein, and now … those lawsuits will carry on against the estate of Jeffrey Epstein.

So I suppose it’s some of the information that would have otherwise been disclosed that will prove embarrassing to some public officials, and private individuals who are rather prominent may still come out. But all of that remains to be seen.

Davis: Yeah, one of the most regrettable aspects of this is that those victims won’t get the chance to confront him in a court publicly. Do they have any recourse at this point, and what does the road look like for them going forward?

Malcolm: Well, two things I suppose. One is their civil suit will proceed. … They were never going to get the satisfaction of getting their lives back, but in terms of potentially getting money out of the estate, that might survive.

And I would note that Jeffrey Epstein did not carry out his extensive pedophile activities by himself. It was alleged that he had co-conspirators.

One of the unusual things about the plea deal that Alex Acosta worked out with Jeffrey Epstein over a decade ago, or whenever it was when he was U.S. attorney in Miami, and it struck me as being very strange, is that the agreement to not prosecute Jeffrey Epstein federally, and to allow his state prosecution, a guilty plea in state court to be all that was going to happen. It was an agreement not to look at any of his alleged co-conspirators.

If you think that that deal was not binding on Jeffrey Epstein, as the New York U.S. Attorney’s Office clearly did, it is certainly not a binding in terms of protecting any co-conspirators.

So I suppose it is possible that if there are people who are within the orbit of Jeffrey Epstein’s world, who facilitated sex trafficking with minors in New York, then they may face legal jeopardy, as they should.

Trinko: You mentioned some of the high-profile figures who came out in the names on Friday, those documents that were unsealed from an alleged victim of Epstein’s. We know, of course, also that President Trump and former President Bill Clinton have ties to Epstein. Should we expect then that the investigation into others who might be guilty of these things keeps going?

I don’t know what the statute of limitations on those sorts of things are. It would be very difficult, I think, to prove … You might be able to prove somebody who procured women — or maybe they were boys, I don’t know — on an ongoing basis that there might be records of that, or a lot of witnesses to come forward. It’s going to be very, very difficult, I think, to prove if—I’ll just pick a name—Sen. George Mitchell denies that he slept with an underage person. And I would be very surprised if there were videotapes or audiotapes that would prove whether that was true or not.

I think it’ll be difficult to go after people like that, but we’ll see. And some of these victims may decide to add some of those names in terms of their civil lawsuits.

Look, there were a lot of very prominent people, and this was a multimillionaire, if not a billionaire. You know, people who own their own private islands tend to have a lot of money, and he traveled in mighty high circles, including with the current president and the former president.

Davis: The internet has been rife with theories … that one of the high-profile profile people that you mentioned could have perhaps arranged for him to be murdered.

Unless there is some videotape that was monitoring Jeffrey Epstein’s cell the entire time, I suppose … it’ll be difficult to discern whether somebody sneaked into his cell in the middle of the night and murdered him.

There’s been an autopsy performed now. I’m assuming that a thorough and professional autopsy would probably be able to give a pretty good indication as to whether somebody committed suicide, or whether there was a struggle. I don’t know … what other physical evidence was found in the cell.

I’m assuming that these are conspiracy theories that are unfounded, and that they will be debunked, but I don’t want to prejudge any facts.

Trinko: Sen. Ben Sasse, Republican of Nebraska, said in a letter to Barr over the weekend … “heads must roll,” referring to the government’s role and being in charge of this prison, etc.

What do you think? Do you think we’re going to see firings?

Malcolm: I don’t know. We’ll first find out what the facts are.

It’s certainly horrific that something like this happened. I cannot imagine why a decision was made to take this guy off of a suicide watch.

You do hear of this sort of thing happening from time to time in state prisons. It rarely happens in federal prison. Clearly, something wrong happened and some horrific judgment was exercised.

… I assume it will resolve in some form of disciplinary action against somebody, whether it was also somebody being fired, or their head otherwise rolling, I couldn’t tell you. But this is a very serious matter. This was a high-profile case, a very important case, and clearly some horrific judgment was exercised, and it’s important that we find out why.

Davis: This goes to the public’s trust in our justice system, right? If it’s seen that people who are powerful enough and wealthy enough can escape justice, that’s not a good perception for a justice system.

Malcolm: I’m not … so sure that somebody being, one, held pretrial against their wishes—Jeffrey Epstein was arguing that he should’ve been released on bond—and two, somebody who kills himself has escaped justice.

I would agree, though, that he should have faced justice, in the sense of being rightfully convicted in a court of law and confronted by his accusers.

It’s not a very satisfying conclusion that he committed suicide, rather than being convicted in a court of law, and certainly in terms of the competence or judgment that was exercised by the prison officials here that wouldn’t exactly inspire confidence. I wouldn’t read too much in terms of the lack of faith in our criminal justice system as a result of this horrific mishap, but a mishap it was.

Davis: All right. Well, John Malcolm, I appreciate you being on today.

Malcolm: Great to be with you.