A Government Loan Program for Auto Manufacturers on Road to Repeal 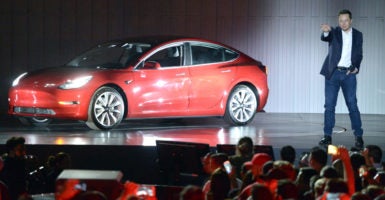 Among programs on the chopping block in the White House’s new plan to cut more than $15 billion in wasteful government spending is the Department of Energy’s loan program for certain automakers. Congress should drop the guillotine and rescind the $4.3 billion remaining in this Advanced Technology Vehicles Manufacturing loan program.

The Congressional Budget and Impoundment Control Act of 1974 authorizes the president to rescind funding previously enacted into law.

Established by Congress under the Energy Independence and Security Act of 2007, the Advanced Technology Vehicles Manufacturing program illustrates why the federal government should not finance energy investments.

One loan recipient and failure of the program is Fisker Automotive, an electric car company that received $529 million in April 2010 to develop and produce two lines of hybrid plug-in vehicles at a plant in Delaware.

Fisker’s inability to meet performance targets prompted the Energy Department to cap the money lent at $192 million. Fisker filed for bankruptcy in November 2013. The federal government recovered $28 million, and then recovered another $25 million by selling the loan at auction, leaving a loss of $139 million.

Red flags should have made it apparent that Fisker was not credit-worthy for a government loan. Fisker spent $600,000 per car, which was sold to auto dealers for an average of $70,000, and had a CCC+ credit rating.

After the Fisker failure, the head of the loan program office, Peter Davidson, explained why the government sank money into the project, writing: “Early on, Fisker Automotive looked very promising—raising more than $1.2 billion from leading private sector investors who believed in the company and its business plan, and also attracting strong support from both Republicans and Democrats.”

If a company can attract $1.2 billion from the private sector, it should not need help from the federal government. The question is, would Fisker have generated that much investment absent the government’s loan?

The Energy Department loan artificially made this dubious investment appear more attractive and lowered the risk of private investment. For instance, private investors sank $1.1 billion into Fisker, but much of the private financing came after the department approved and closed the loan.

Another company, Vehicle Production Group LLC, received a $50 million direct loan through the program in March 2011 to develop and produce vehicles that were powered by natural gas and wheelchair-accessible. The company failed to make loan payments, the Energy Department discontinued the project, and the company ceased operations in May 2013.

The government recovered $3 million by selling the loan and recovered $5 million from an escrow payment, leaving a loss of $42 million.

In addition to picking losers, the federal government doled out billions in what is blatant corporate welfare and effectively an auto bailout by another name.

The DOE also issued the loans to both Ford Motor Co. and Nissan North America to retool factories to produce more fuel-efficient and electric vehicles.

In September 2009, the department loaned $5.9 billion to Ford to upgrade facilities in Illinois, Kentucky, New York, Michigan, Missouri, and Ohio. In January 2010, it loaned Nissan a $1.45 billion loan to build a battery manufacturing plant and retool existing factories to expand development of its electric vehicle, the Nissan LEAF.

Ford and Nissan are well-established companies. Drivers value energy efficiency and saving on fuel costs. If Ford and Nissan thought these investments and retooling of manufacturing plants were a way to meet market demand, they should have been completely privately financed outside the government.

The real economic question mark of the loan portfolio, however, is Elon Musk’s Tesla Inc., the California-based company that specializes in electric vehicles, energy storage, and solar panel manufacturing.

The Energy Department and proponents of government-backed loans and loan guarantees advertise Tesla as a success of the loan program. The department loaned Tesla $465 million in January 2010 to reopen a former plant in California to produce electric vehicles and to develop a manufacturing plant to produce battery packs.

Tesla fully paid back the loan in May 2013. But whether Tesla continues to be profitable remains to be seen. Both federal and state governments are doing a lot to help—using taxpayers’ money to subsidize consumption of electric vehicles, which disproportionately benefits the rich.

A recent Bloomberg article headlined “Tesla Doesn’t Burn Fuel, It Burns Cash” warns that the company could run out of money this year. The article notes that Tesla spends $7,430 every minute and features a nifty little calculator that shows you how much money Tesla has spent since you started reading the story.

Regardless, if companies like Tesla promise to be the wave of the future, they should secure investment and loans through the private sector. A system that privatizes the profits and socializes the losses does much more damage than put hard-earned taxpayers’ money at risk.

Government interventions distort free enterprise and allow Washington to direct the flow of private-sector investments. This is not a recipe for more innovation and economic growth. It’s a recipe for ever-expanding cronyism.