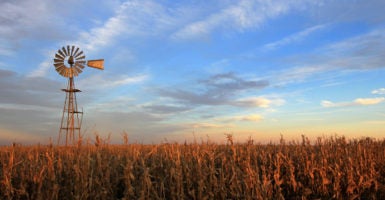 The House Agriculture Committee’s farm bill is a complete rejection of the U.S. Department of Agriculture’s 2018 farm bill principles when it comes to farm subsidies.

Here are a few examples:

The committee’s farm bill doesn’t include any of the Trump administration’s farm subsidy reforms from either the fiscal year 2018 or 2019 budgets.

For example, it doesn’t include a widely supported fiscal 2019 budget recommendation that would reduce premium subsidies for farmers.

Subsidy proponents claim that this proposal would hurt farmers and the crop insurance program. That’s a red herring.

The Congressional Budget Office, analyzing its own policy option of reducing the taxpayer obligation to 47 percent (1 percentage point lower than the Trump administration proposal), found that as a result of this change, there would be a reduction in insured acres of just one-half of 1 percent and only 1.5 percent of acres would have lower coverage levels.

The committee’s rejection of the Trump administration budgets is even more egregious, though. The fiscal 2019 budget would “limit eligibility for commodity subsidies to one manager per farm.”

“Setting sound, enforceable payment limits for subsidies is a straightforward way to close loopholes that allow some farmers to exploit the system. They do this by using nonfarming family members—or ‘managers’—to qualify for additional subsidies, paid by taxpayers,” Grassley wrote. “This practice is dishonest and ties up funds that could help young farmers get started in farming.”

Unfortunately, the committee bill would actually expand the number of nonfarming family members who can receive commodity subsidies.

Taxpayers have paid about $800 million to Brazil in recent years because of our trade-distorting cotton subsidies. To help minimize the risk of future trade problems, Congress decided to exclude cotton from the two new major commodity programs, the Agricultural Risk Coverage and Price Loss Coverage programs.

Cotton is already one of the most heavily subsidized commodities through other programs, such as crop insurance.

The committee bill would include cotton in the Agricultural Risk Coverage and Price Loss Coverage programs, making it very likely that Brazil would retaliate against the U.S., or that taxpayers would be forced to pay hundreds of millions of dollars to Brazil (again) to settle a dispute that Brazil would probably win.

The committee bill would effectively guarantee payments for commodities in the Price Loss Coverage program. The program includes fixed prices (i.e., reference prices) set in law for various commodities. When prices go below the reference prices, payments are triggered to farmers.

Since commodity prices are so much lower than the reference prices in the committee bill, payments are effectively going to be guaranteed right from the outset.

This gaming of the system distorts markets by encouraging production of certain commodities over others and would actually increase shallow loss payments. In fact, as indicated, farmers would effectively be guaranteed payments.

In addition, the bill in no way addresses any of the market distortions that the existing subsidies already create.

USDA principle: “Encourage entry into farming through increased access to land and capital for young, beginning, veteran, and underrepresented farmers.”

One of the main obstacles to get into farming is finding affordable land. Subsidies drive up land prices, which creates a major barrier to entry for anyone who wants to get into farming. The committee bill doesn’t adopt any subsidy reforms that would address this problem.

In summary then, the House Agriculture Committee’s farm bill makes the out-of-control farm subsidy problems even worse. By contrast, the Trump administration has pushed for commonsense reforms. When the House considers the farm bill, it should follow the administration’s lead, not the committee’s.