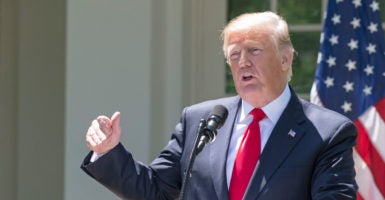 President Donald Trump, without saying he would pull out of the Iran nuclear deal, said Monday that he is open to signing a better agreement with the Islamist regime.

Commenting after Israel accused Iran of cheating on the deal, Trump also rejected the premise that by pulling out the U.S. would jeopardize a separate nuclear deal with North Korea.

“No. I think it sends the right message,” Trump said of his possible move during a joint press conference with Nigerian President Muhammadu Buhari in the Rose Garden of the White House.

The month of May could prove to be monumental for the Trump administration and global politics.

The United States has until May 12 to decide whether it will remain in the 2015 multilateral deal, led by the Obama administration, to temporarily delay Iran’s development of nuclear weapons.

The president said he will meet with North Korean dictator Kim Jong Un in late May or early June.

“I’m not telling you what I’m doing, but a lot of people think they know,” Trump said regarding Iran. “Before the 12th, we will make a decision. That doesn’t mean we won’t negotiate a real agreement.”

Trump’s comments came after Israeli Prime Minister Benjamin Netanyahu made the case in a televised address that Iran was cheating on the terms of the nuclear deal and “brazenly lying” about its compliance with the agreement its negotiators call the Joint Comprehensive Plan of Action, or JCPOA.

Netanyahu talked about how Israeli intelligence had discovered that Iran has a program called “Project Amad” to develop a nuclear weapon.

Trump said the new revelations proved he was correct in criticizing the Iran deal.

“If anything, what’s happening today and what’s happened over the last little while and what we’ve learned has really shown that I’ve been 100 percent right,” Trump said.

Under the current agreement, the president noted, Iran could move relatively soon once again to develop nuclear weapons:

Last week during visits with Trump at the White House, French President Emmanuel Macron and German Chancellor Angela Merkel urged Trump to remain in the Iran nuclear deal. These two countries, along with Great Britain, China, and Russia joined the United States in the deal.

Regarding his expected meeting with the North Korean leader, Trump said he is interested in doing so in the Demilitarized Zone, or DMZ, the border dividing North and South Korea.

Trump said he talked about this with South Korean President Moon Jae-in, and South Korea conveyed the message to North Korea.

“There is something I like about it because you are there, where if things work out, there is a great celebration to be had on the site, not in a third-party country,” Trump said.